So, my holiday to the South of France. What follows is a fairly short review, with only photos that are either interesting for vintage folks due to either outfits, or amusement factor…. so, if you care to, read on!

This holiday was with five of the best gals a lady could hope to know. I’d never actually been on holiday with friends before, ever. Most of the people I know have been on various girls’ or lads’ holidays, but I’ve only ever been away with family or partners. Actually, I tell a lie, I have met up with friends on holiday before, but never have I been holed up in a house with a group of friends. It could have gone horribly wrong… but in fact it was utterly perfect in every way. Amazing food, good wine, a roaring fire, long sleeps and hours and hours of side-splitting laughter made it a trip I will never forget, and just the thing to chase away the last vestiges of the black cloud that’s been looming over me since last spring. About bloody time and all!

The five friends were the founding Mafia members, Lisa, Jeni, Bethan, Gemma and Naomi, whose wonderful mum owns the house in which we stayed. We had hoped for some warm spring days, much lazing, some culture (as well as all of the above), and we had an almost perfect record. The first day was mild, if cloudy; and we put on our summery clothing and wandered down to the tiny village of Valbonne, where we caused a huge stir with the locals! Perhaps because instead of being pleased to be on hols, we looked like this? 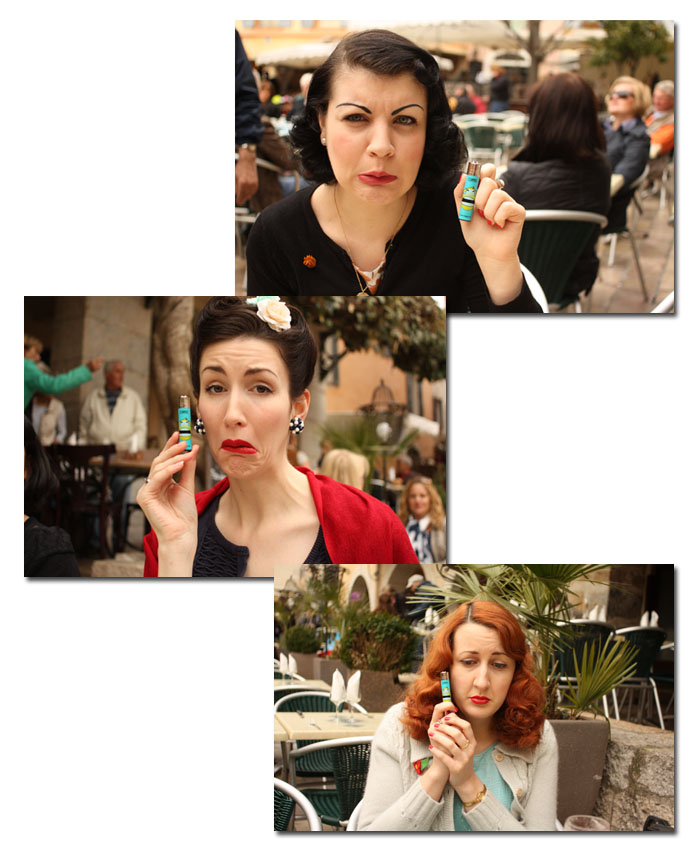 We found Jeni’s lighter with its ‘wah’ face very amusing…

The weather from then on, sadly, was not so obliging. On the next day, we got ourselves all the way from the office de tourisme in Valbonne, to Cannes on the bus, and spent the day there. I think the tragic events in Japan had a knock-on effect on weather around the world because the winds in Cannes were absolutely insane. Jeni took a picture of me (on her blog) trying in vain the shelter by a tree, as the wind did its utmost to inflate my Revamp vintage trousers (which were of sail-like proportions, let’s be honest) and try and blow me away. After a quick turn around a museum, we sheltered in a hotel bar and filled our faces with Nutella-covered waffles instead. 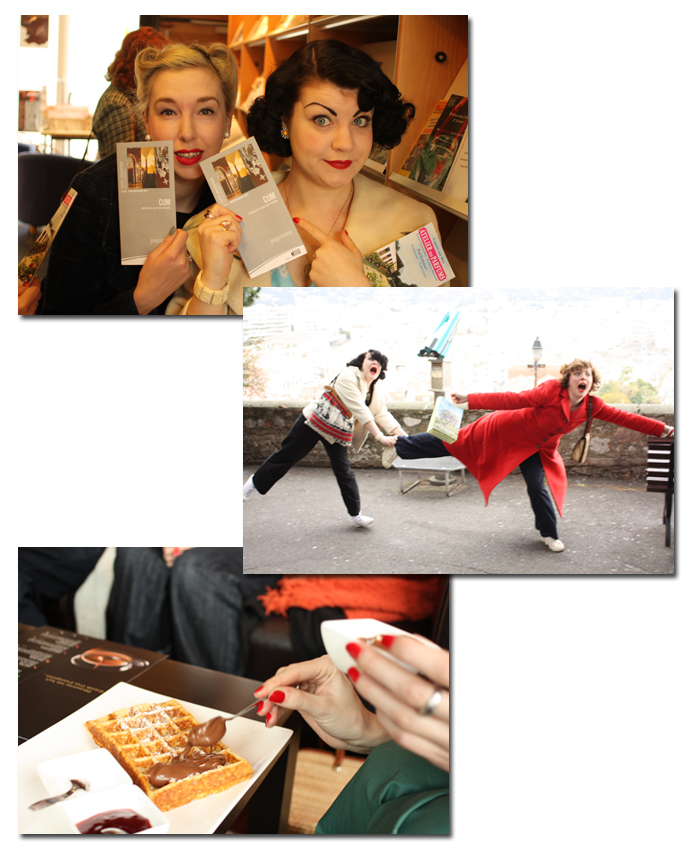 And then it started to rain. Torrentially. A day was spent doing not a lot apart from reading and relaxing. While Jeni and I got hooked on an iPhone game called Sally’s Spa, everyone buried themselves in books whilst wearing leisurewear (more on this later). And thus, the Vintage Booky Club was born. But girls can’t stay indoors all day when so close to such wonderful medieval towns, so after watching the film Perfume the third night, we then took a trip to nearby Grasse, where we visited the rather smashing perfume museum. Here are some of my favourites… 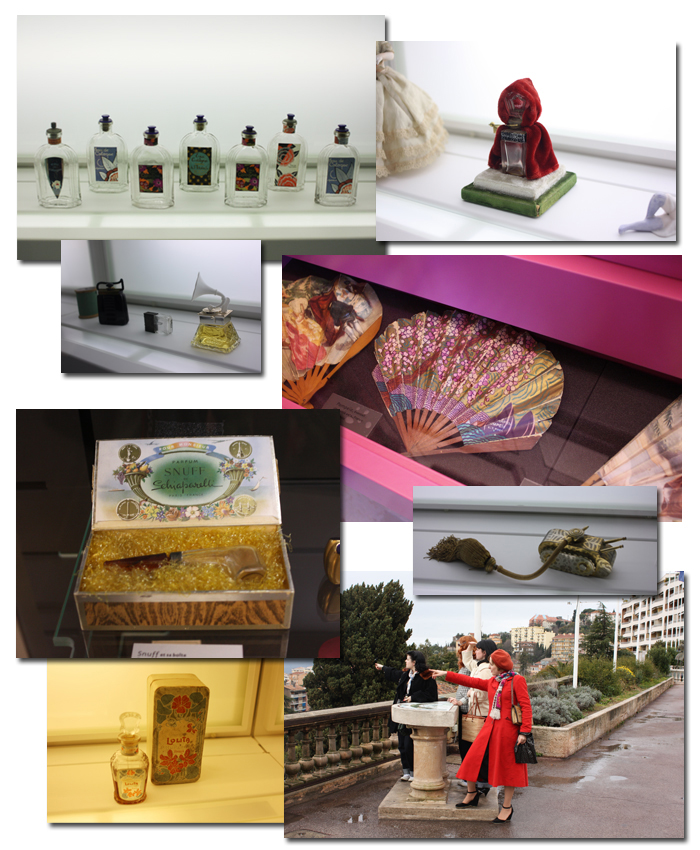 I especially love the Schiaparelli Snuff’ perfume bottle shaped like a pipe…
and the girls’ lovely catalogue pose.

Sadly, lovely Gemma had to go home before the rest of us, so she missed the rest of the fun. We did try really hard to have no fun at all without her, but it proved too hard! We got rained in on one more day, but we spent the only truly beautiful, sunny day undertaking a secret project, which will be unveiled on here and the VM network of blogs soon…then we spent the next couple of days inpersonating elderly Russian babushkas to protect our ‘dos from the drizzle, visiting the Renoir museum in nearby Cagnes sur Mer, explored the medieval hilltop fort; and then, on our final day, we went back to Grasse to visit the other museums. 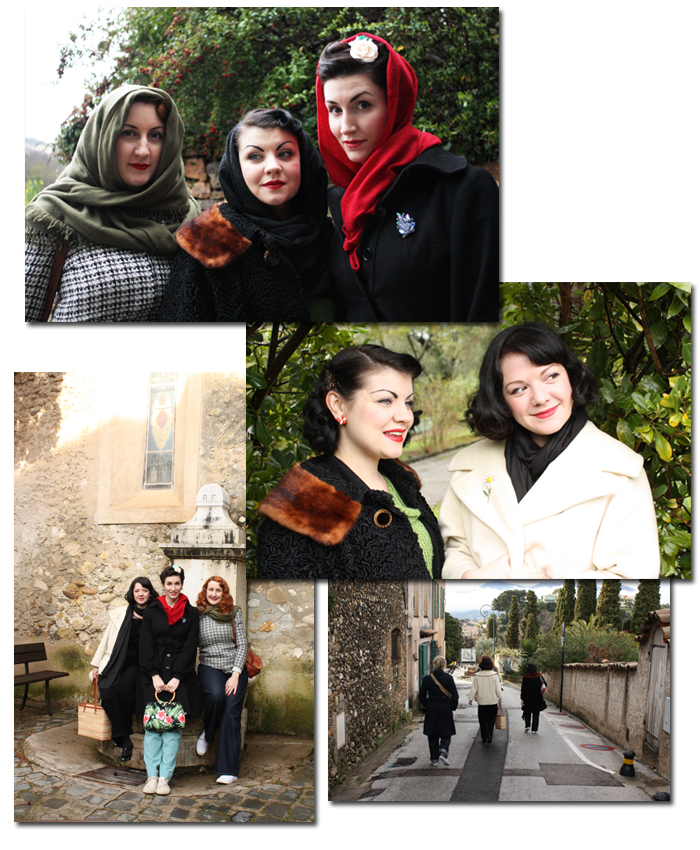 But on the last night we thought it would be really, really funny to put on our matching leisurewear (which we bought especially), and take some silly photos. It was hilarious, though I suspect you probably had to be there… 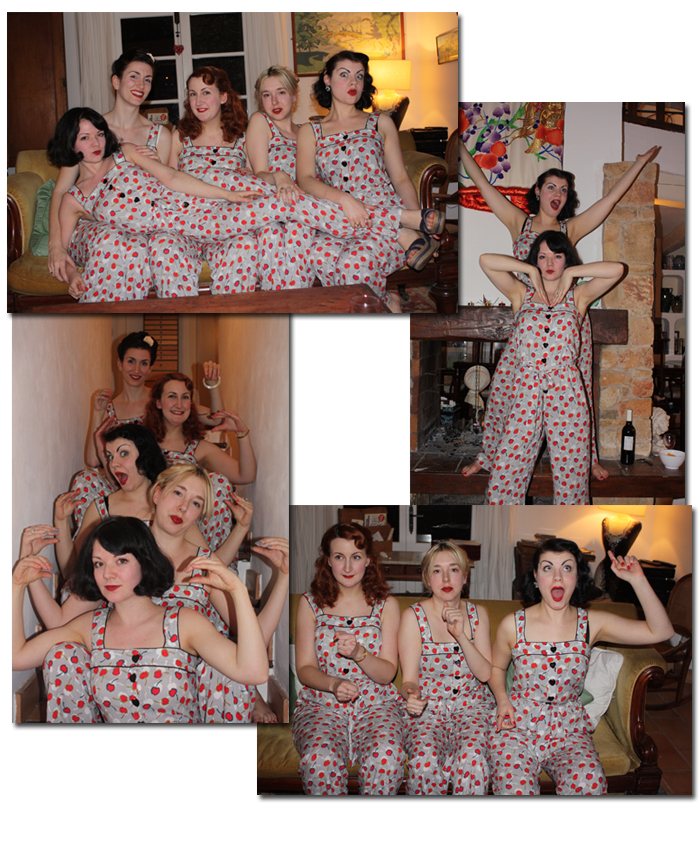 And finally, when the wine, bread (baskets), babooshka scarves and jumpsuit intoxication became too much, it all went rapidly downhill. 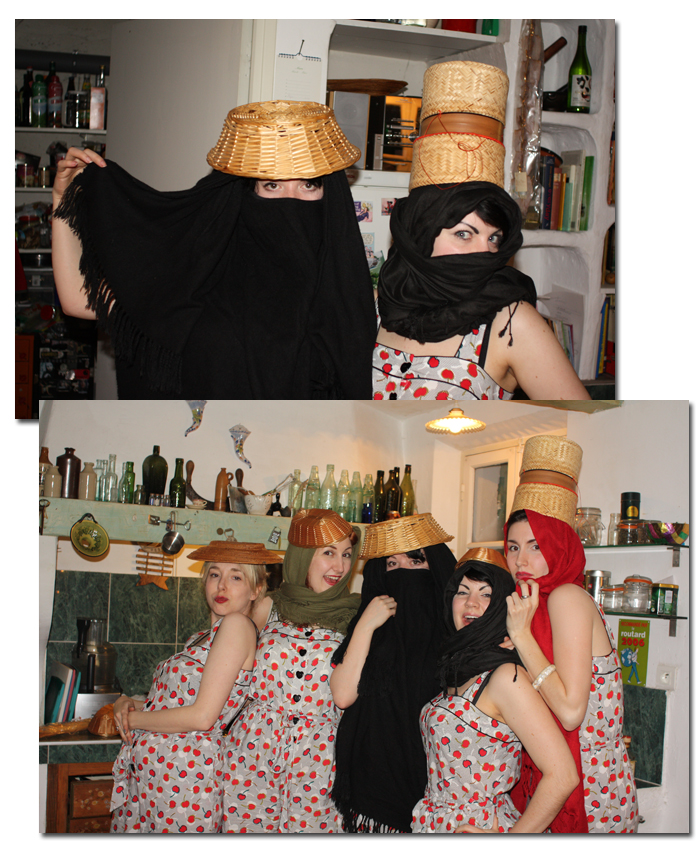 Au revoir until next time! 😉

Seems you all had alot of fun, and you deserved a vacation more than anyone, due to all the hard work you have been doing the passed year.

Holiday Rooooooaoaaaaaaaaaaaaad! Holiday Roooooooaaaaddd! Great, Fleur – now its stuck in my head all evening and the only way to exorcise it will be to a) Watch the Film or b) go on holiday!

GREAT photos – looks like you gals had the best time! How lovely! Specially loving the 'Wah!' faces!

See you soon – this Saturday are you about in K'ston?

I think I just wet myself….I miss my babooshka 🙁

What a great trip. I'm so jealous. All of you ladies look lovely. Have a great day honey!

Did you hear my good news yesterday? Kori xoxo

Tou even look glamorous with baskets on your heads, you lucky ladies! Matalan… well I never! I have actually found a nice 40s style work dress there but I usually associate it with socks n' slippers. Fab jumpsuits!

sooo fabulous! What a way to holiday!

Heh, what a buch of silly heads.

Nothing beats a good girlie holiday it has to be said.

It looks like you had a bunch of fun! Thanks so much for sharing!

Love the pafuuuume bottles – especially the Red Riding Hood one.

And the pic of Gem and Jen holding on for dear life to that bench? HAA HA HA HA HA!!!! 🙂

~ hello Fleur! ~ just an intro from your newest follower * = ) I found your blog through Lisa snoodlebug (hi,Lisa!) and just have to chime in and say how wonderful your French vacation looks from over here!
<3 Especially the perfume museum!
And you ALL look fantastic!!

I wanted to invite you to my blog (it's private! sshh!) but can't see your Email here…so I'll sign for your newsletter ~ then if you'd like an invite you can Email me ok?

I'm a lindy-hop dancer! Also charleston(tandem and side-to-side!) jitterbug and some balboa…collect antiques and vintage clothing…but my blog is more about the things you choose not to write about.
* ; )

As a french follower of your blog I salute your choice to come to Nice for your holidays!:) I spent most of my childhood holidays there and had never been disappointed…except by Grasse which is not my favorite place. If you go back there someday be sure you visit Saint Paul de Vence, a village where a lot of french stars came to…

Vacations with friends are lovely, I'm glad you finally got to experience one! I find they are a whole lot less stressful than travelling with family, but maybe that is just me 😉 Love the matching jumpsuits! Are they new or vintage? because I can't imagine how lucky you would be to find so many vintage ones that fit you all (like the sisterhood of the travelling pants! Only here it is the sisterhood of the crazy cherryprint jumpsuits!)

Love this! You guys look like you had tons of fun, aren't vacations great? 🙂 I hope to have one soon as well! xoxo

Hello from a new follower!
Those jumpsuits are absolutely wonderful!

And what did you think of the film Perfume? I am afraid to see it in case it utterly ruins the original book, which is possibly the most fascinating (and disturbing) novels I have ever read.

And Nutella on waffles!? I am such a Nutella addict that I must try that someday. Looks like you had a lovely holiday.

Fab photos Fleur, looks like you all had a great time! The matching jumpsuits look good, great idea.
Kaye x

What fantastic fun you all had! A girlie holiday eh? I haven't been on one either, you did a good job of advertising them though!!

It looks like you had the most fantastic time. Thanks for sharing these photos and stories with us – I loved reading through and smiling at the fun you all seemed to be having.

You girls look great in your matching jimjams. Who needs good weather when you have a great place to stay with some great friends!!

Helloooo, from one of your new followers!
Looks like you had a wonderful time! Was looking for an appropriate post to share this and just happened you wrote your holiday one! Found this in a magazine the other day and thought it looked so amazing I just had to share it with all you vintage gals!
http://www.canopyandstars.co.uk/find-a-place/the-dapper-camping-club
Maybe for those wanting to "holiday at home!" 😀

Thank you for sharing your holiday with us. It was wonderful and I smiled all the way through your blog! Great photos and a great read.

Oh so much fun! Weekends with vintageGF's are the best!! Thank you for sharing those wonderful pictures. Imagine if we did a big international version of this? How fun! 🙂 Xx

Oh wow, that looks like so much fun. Love the chocolate waffles and matching leisure wear.
P.S I played Sally's Spa once and it was SO addictive I would not allow myself to play it ever again.

Hi Fleur, do you know if there is a post mail list for up and coming 1940s events around the country?

Lurker here. But I had to comment this time because O Fleur, I laughed so hard at these pics. I never thought a fashion blog would make me choke on my tea.

Looks like so much fun!
Have a sweet day!

Love this your post that shows your finny side!!!

There's a Schiaparelli "Snuff" bottle, in the original box, up for auction on ebay this week!
Go for it! May the force be with you!

Hello Fleur, love love LOVE the matching leisure wear and incriminating photos. Can relate to the 'had to be there' vibe.

I came across your blog via Straight Talking Mama and loving it, have discovered a couple of new blogs recently which I am now addicted to. When I most certainly should be doing other stuff!

Going on a holiday with your girlfriends is fab. A group of 7 of us do it every couple of years but we don't look nearly as gorgeous as you & yours. Our connection is that we went to boarding school together, I am the only one who is into vintage (even though I'm trying hard to convert the others) but we have a great time regardless. Your matching leisurewear has given me an idea for our next catch-up in a few weeks.

Looking forward to your future posts.

Grasse is my favourite place in the world ever. (I also went there on a girls' holiday). You should go back for the Jasmine festival in August – 'tis amazing!

You ladies are plain amazing!! And the last pictures are so much fun, it must have been a fantastic trip!
Ale

Aw, doesn't this just make you want to take a vacation with your besties! I love this post. So cute with the matching pjs, too!