Last week, it was my birthday!
I turned 33, a nice satisfyingly symmetrical albeit large and scary number! In contrast to previous years, I kept it completely low key this year, but still celebrated in two parts as is traditional – on the Saturday closest to the day, and on the day itself.

Actually, three parts, if we want to get technical.

On the Saturday before, I had all these great plans, which were systematically ruined by the British weather. I had planned to go to a brand-new crazy golf course not far from my east London flat – it’s Moby Dick themed and looks amazing. Sadly, it poured all morning, so I cancelled.

This is when they were building it, but how great does this look?
It’s the Premier Inn behind the ship that really makes it, I think.

The next plan was to go bowling! Woo hoo! Who doesn’t love bowling? Sadly, All Star Lanes was fully booked. Sad trombone.

So instead, I gathered the last stragglers of the group who were originally coming to play crazy golf (if there’s one thing guaranteed to curse attendance of birthday plans, it’s changing said plans. Apart from the weather, obvs), and we instead went for food (everyone) and a beer (me) at All Star Lanes and a mooch around Beyond Retro. Oh, and a hard milkshake (also me)!

These are all candids from phones as sometimes it’s more important to enjoy your birthday than have the specific goal to turn it into a blog post! 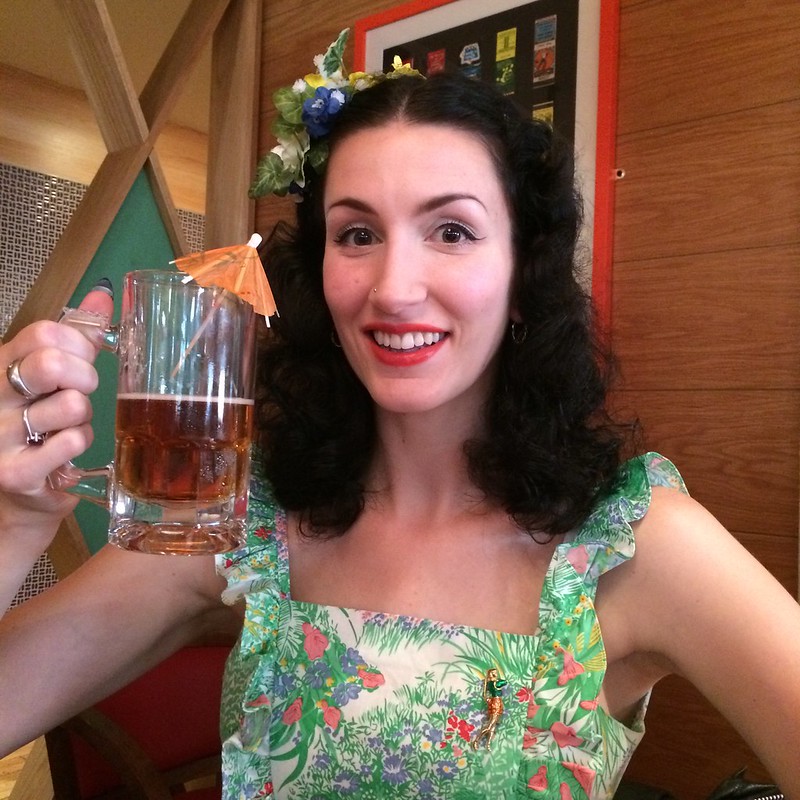 Always have your beer with a cocktail umbrella on your birthday!
Five beautiful ladies joined me at All Star. They were: 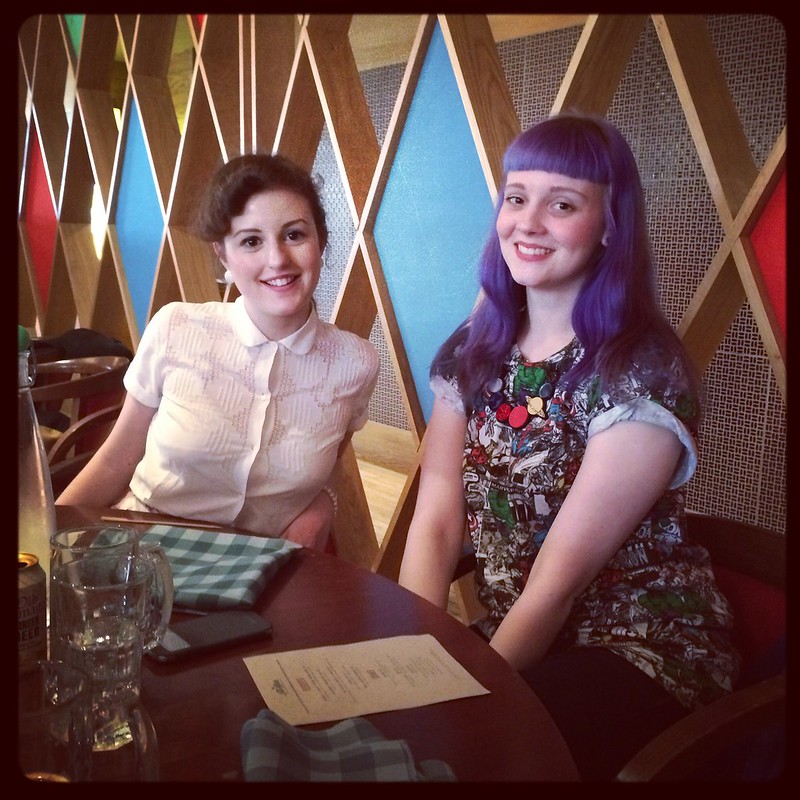 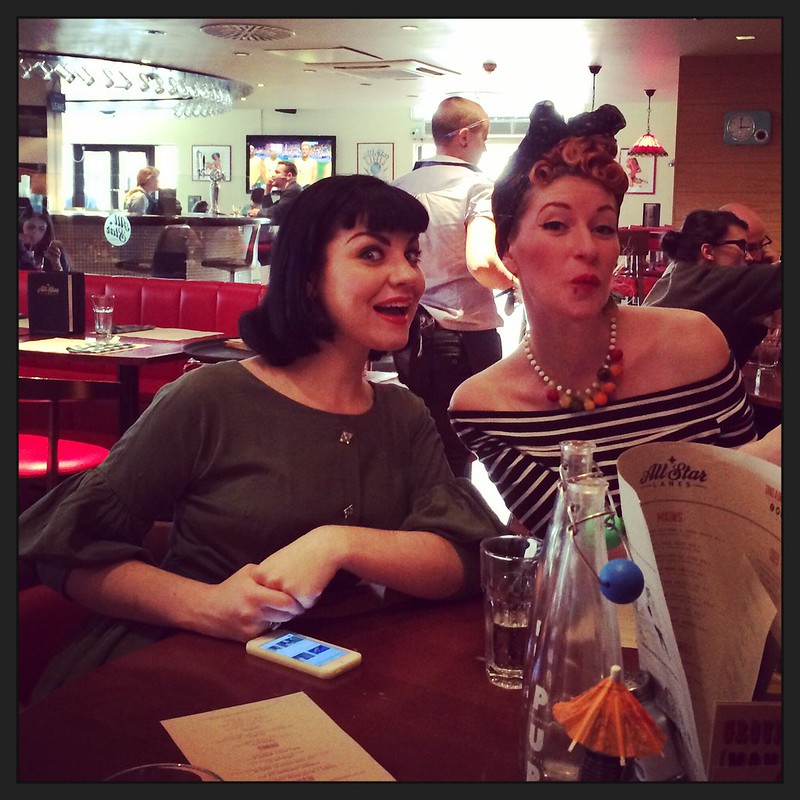 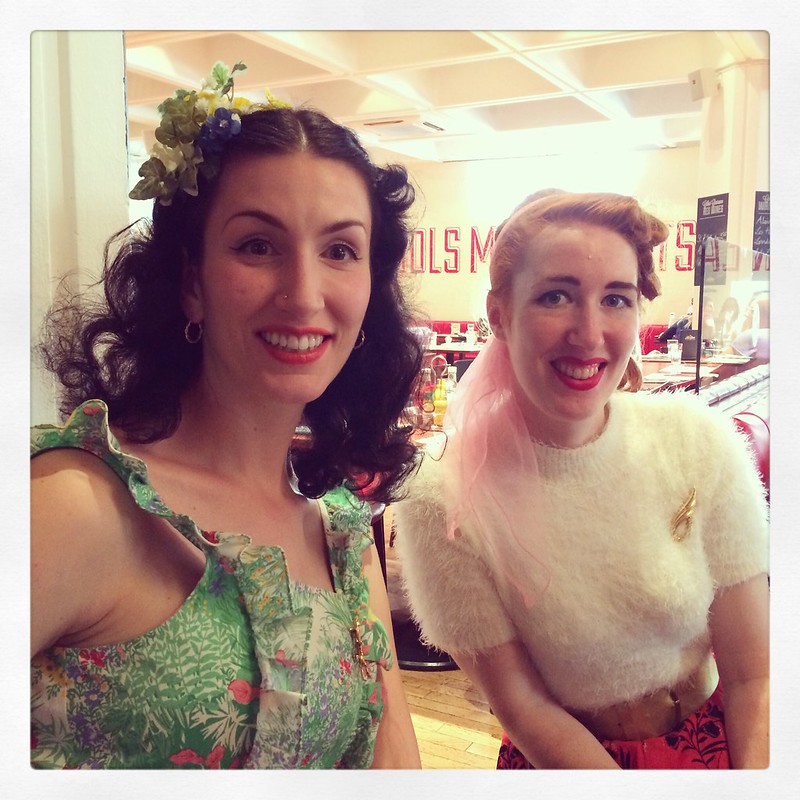 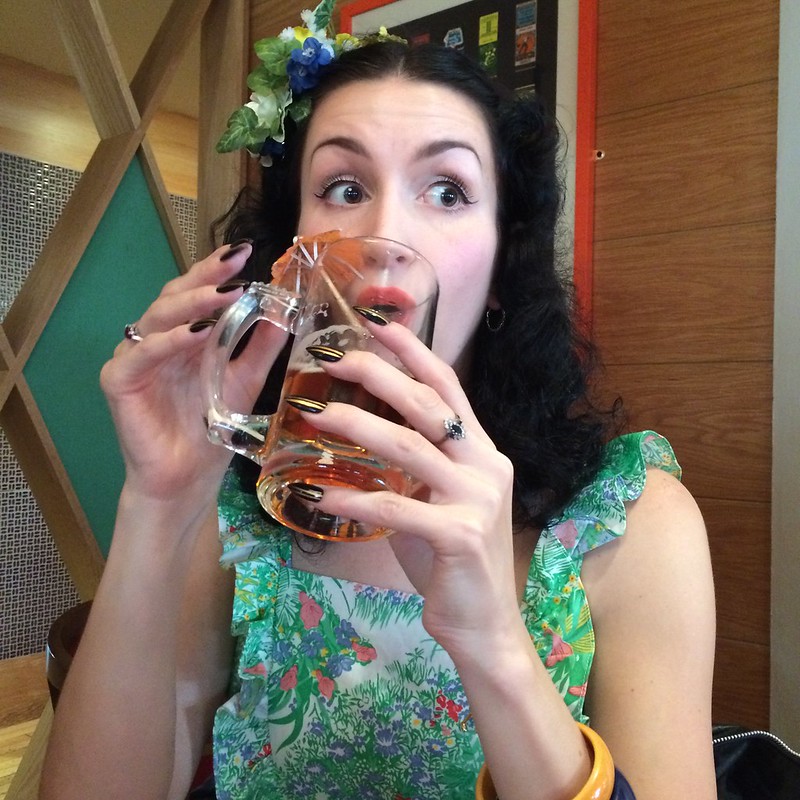 We then went to Beyond Retro where I bought some cowboy boots for £12 before decamping to the awesome (or dare I say ace) Ace Hotel on Shoreditch High Street. It’s like a mid-century-ish dream in there, the food and drinks are nice, even if not cheap… and when the waitress overheard that it was my birthday, she brought me this! So nice! 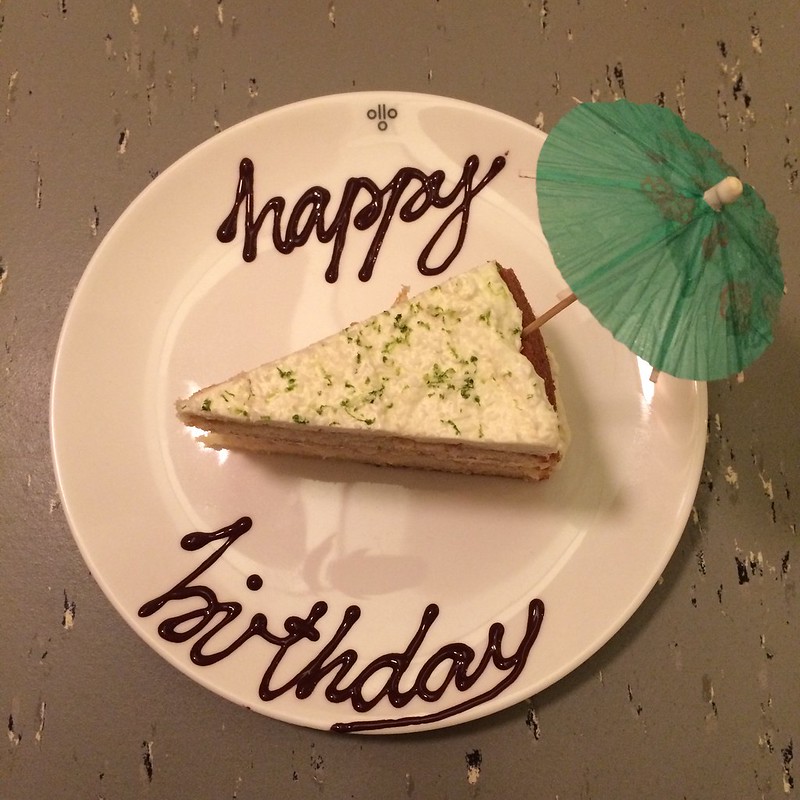 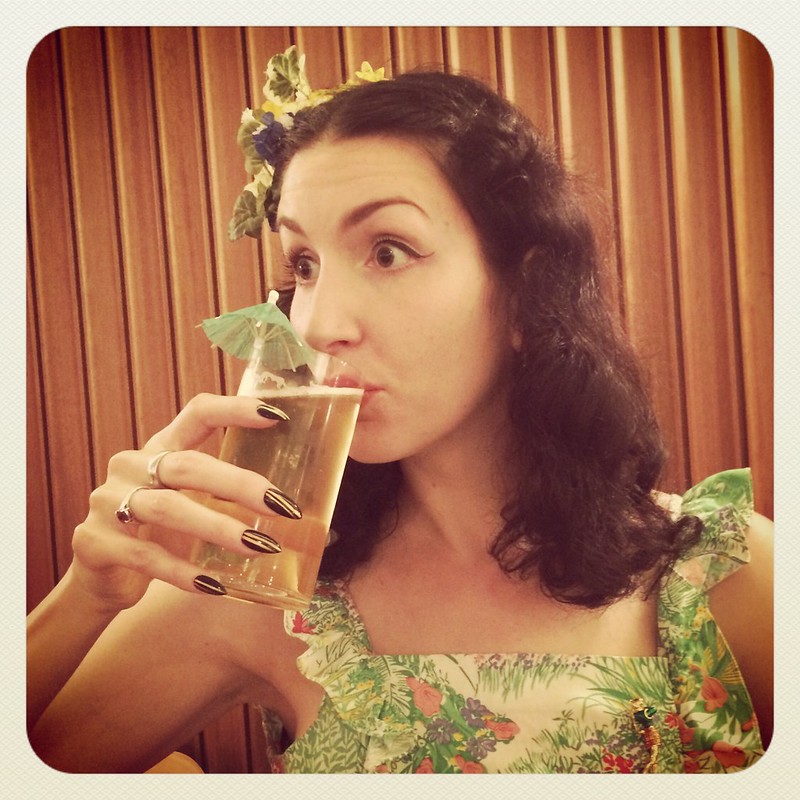 More beer! Are you sensing a theme?

That night, I met up with Bethan and a few others and headed to Last Resort, always just the best night out ever. Well, this side of 2004, anyway.

On the day of my actual birth, last Monday, I did something I have not done in nearly two decades… I went to a theme park!

Thorpe Park used to be the crapper version of Chessington World of Adventures – smaller and with no good rides. Then, they started getting all the good rollercoasters! Sadly, in the meantime I got myself a boyfriend who hates both heights and rollercoasters. 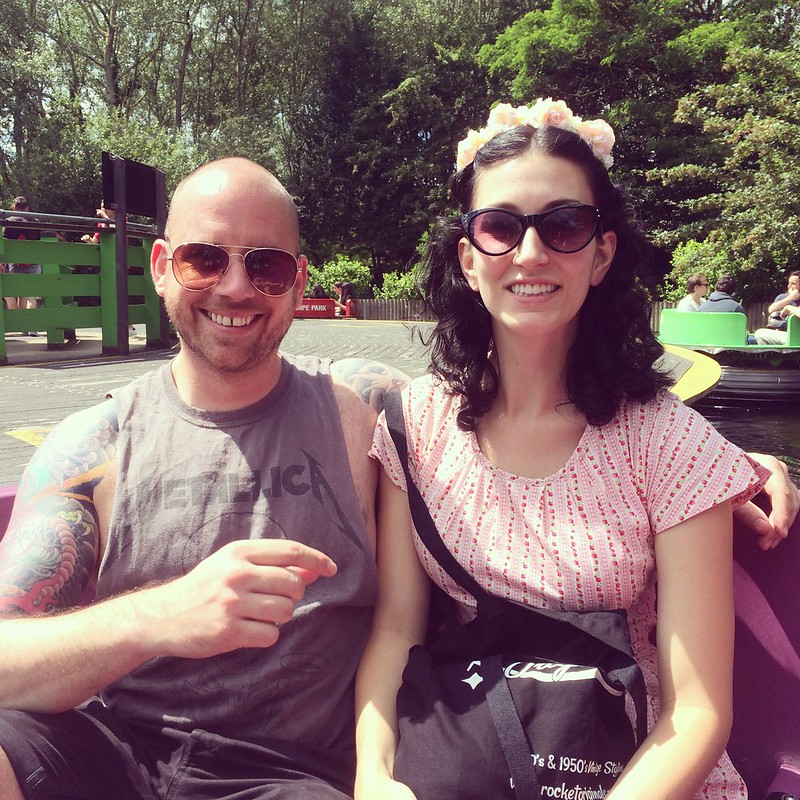 He had no problem with the more sedate, ‘family friendly’ rides, like Rhumba Rapids, pictured above. I did manage to persuade him to go on Colossus though. An excellent difference in facial expressions can be clearly seen! Hehe. 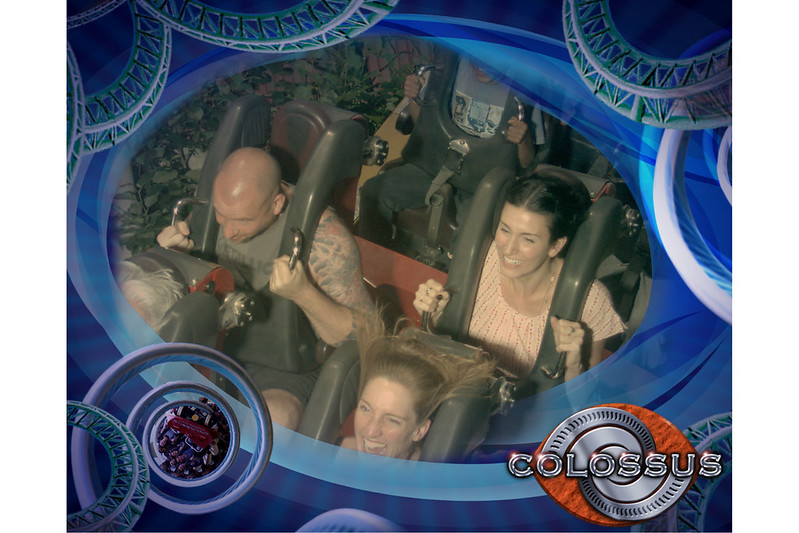 For the rest of the big ones, I was on my own! I queued for Swarm for the longest. 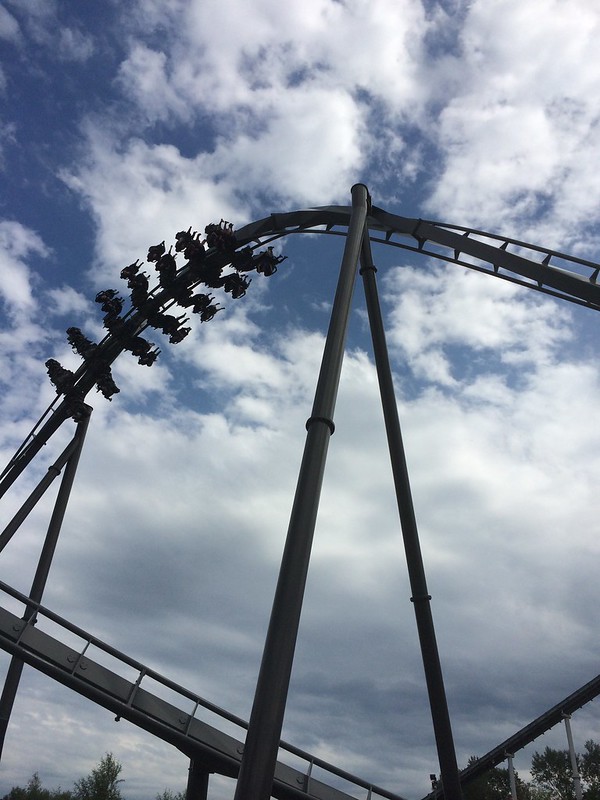 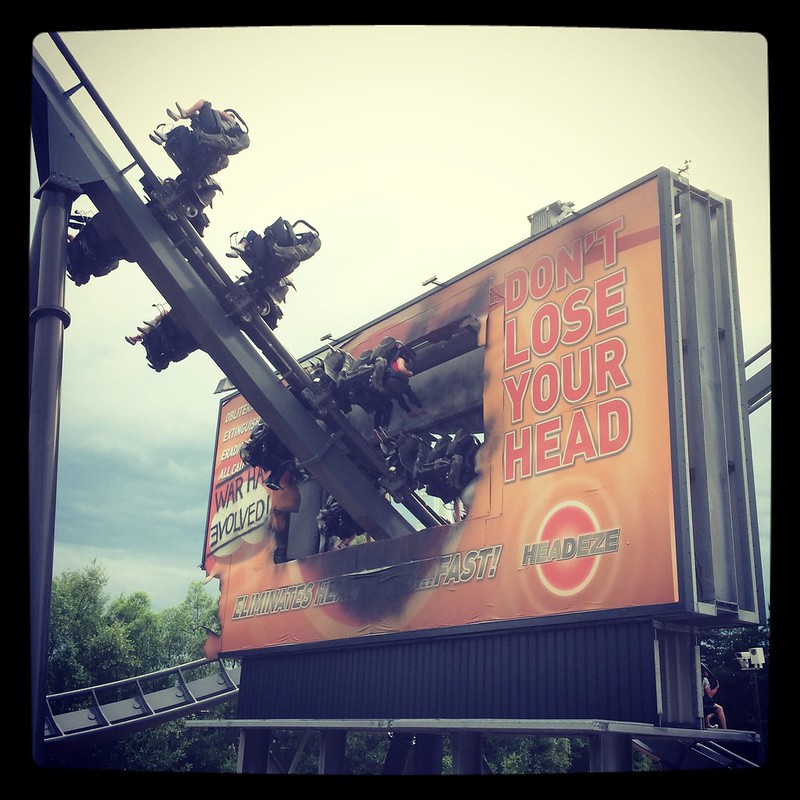 You could choose to go forwards or backwards – I went forwards! 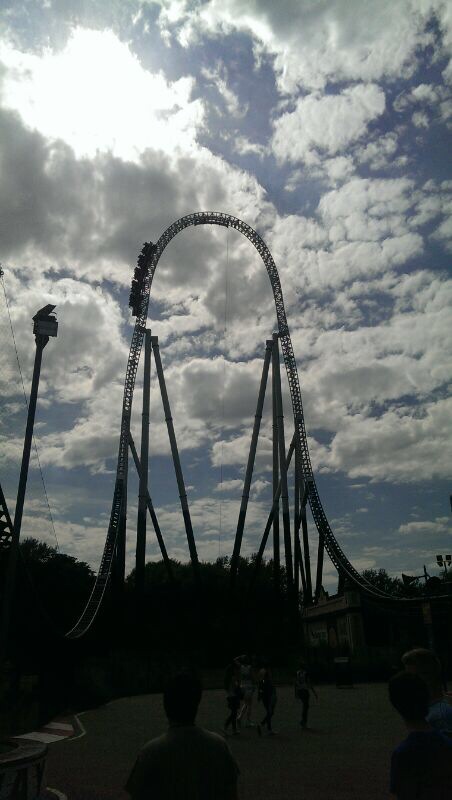 Here you can see me (or not) plummeting on Stealth – the fastest rollercoaster in Europe. On my own, of course.
Sean did go on Tidal Wave with me, which Jeni warned me about. You get wet through like you’ve jumped in a pool! That was the basis behind wearing a Fleur dress – repro for durability, cotton for quick drying! Luckily it was a beautiful day, so I wasn’t drenched for long… 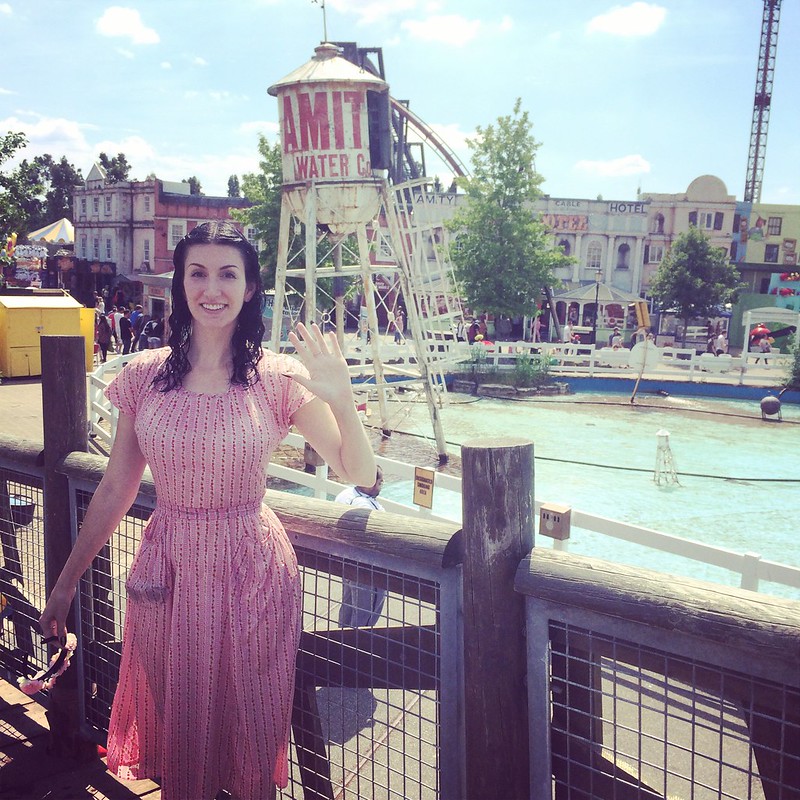 Last, but definitely not least, stop on my birthday adventure was the Ace Cafe – home of the famous Ton Up Boys (and girls) and Rockers in the 50s and 60s! 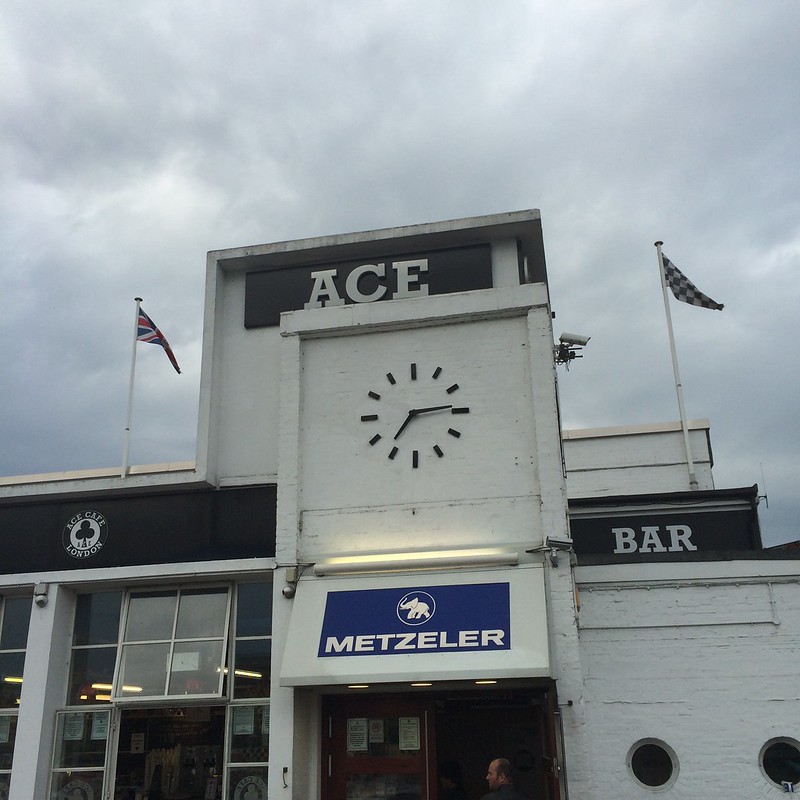 The food was as could be expected but still nice and no rockers were in evidence… a DeLorean was, however! Perfect end to the day. 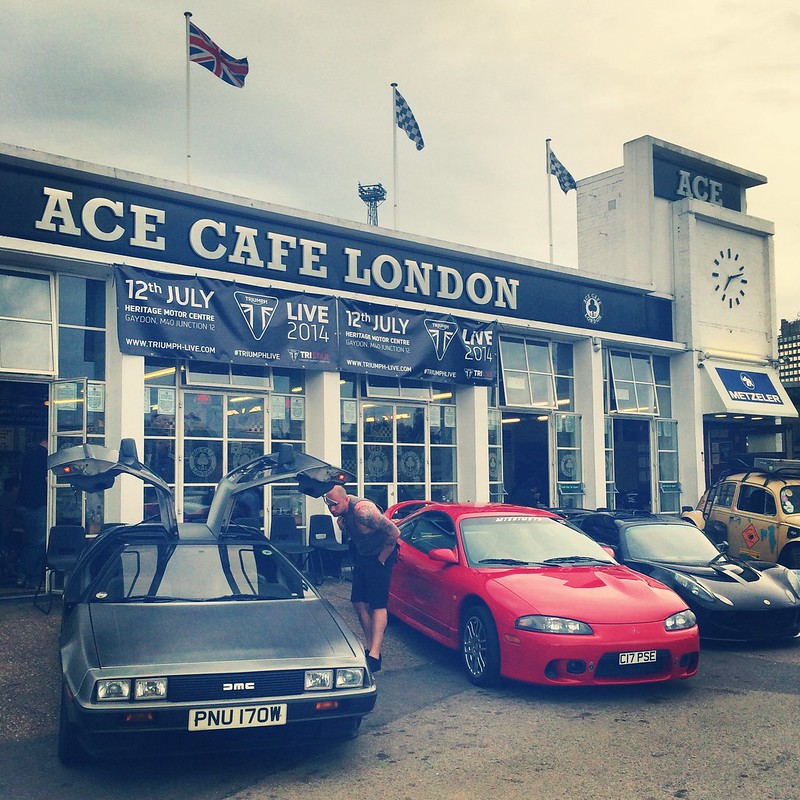 And that was my birthday. Who’s up for a road trip to Alton Towers next year? I’ll leave Sean at home. 😉

The Ace Cafe looks amazing. (I love a bit of junk food, me.) It's annoying the weather was so bad for your birthday; perhaps you can reschedule the crazy golf now it's good again.

Count me in for Alton Towers! My Hubby hates rollercoasters too, but I love them 🙂

Sorry that the weather spoiled your birthday plans (I know these problems, mine is in october, a month equally unpredictable in terms of weather). But glad to hear that you had some fun days nontheless! ~ette

happy belated birthday!!!! looks like you had a wonderful day!
i tell you, it gets totally scary if you see your 37th birthday coming down the road. 😉

Happiest belated birthday wishes!!! I hope you have a fabulous, fun filled year ahead. It's my birthday next month and as of July 10th, I too will be a member of the in-your-30s club. 🙂

Happy birthday! Looks like you had an awesome time, love your style and blog!
Teenage Daydreams
X

Your nails are absolutely fabulous Fleur! What nail colour did you use?

Happy birthday! It's too bad your golf outting didn't come to pass, but it looks like you still managed to have plenty of fun.
My boyfriend is the same way with roller coasters. I keep trying to convince him to come to the big amusement park in our area with me, but I don't know if that's ever going to happen. Good on you for getting your guy to hope on one of them with you. I hope he wasn't scared too badly!

Happy Birthday, my dear…you are just a young thing, yet 😉