It’s been a while since I did a King’s Ginger piece at the seaside – my trip to Brighton was many moons ago now! But just like we commoners, Kings (and Queens) like to be beside the seaside too, and Eastbourne is another coastal Sussex town that he visited a lot. So off I went to investigate (and eat fish and chips)! 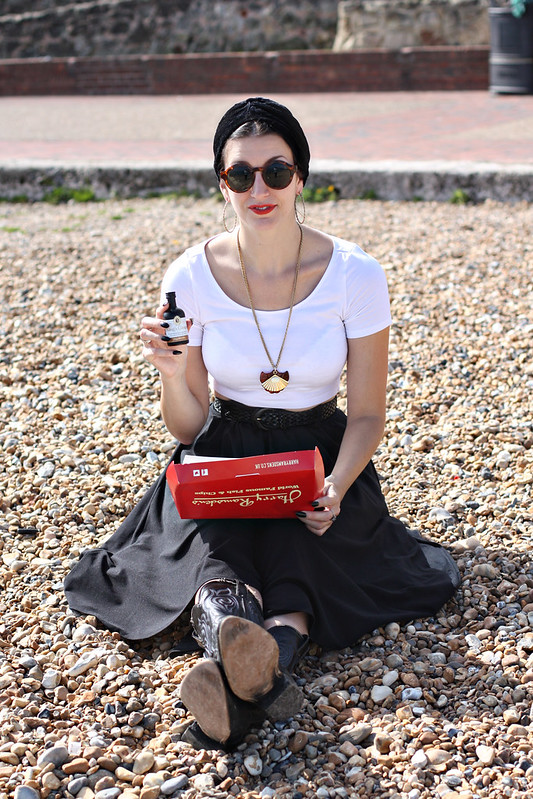 Oh, I do like to be beside the seaside…! 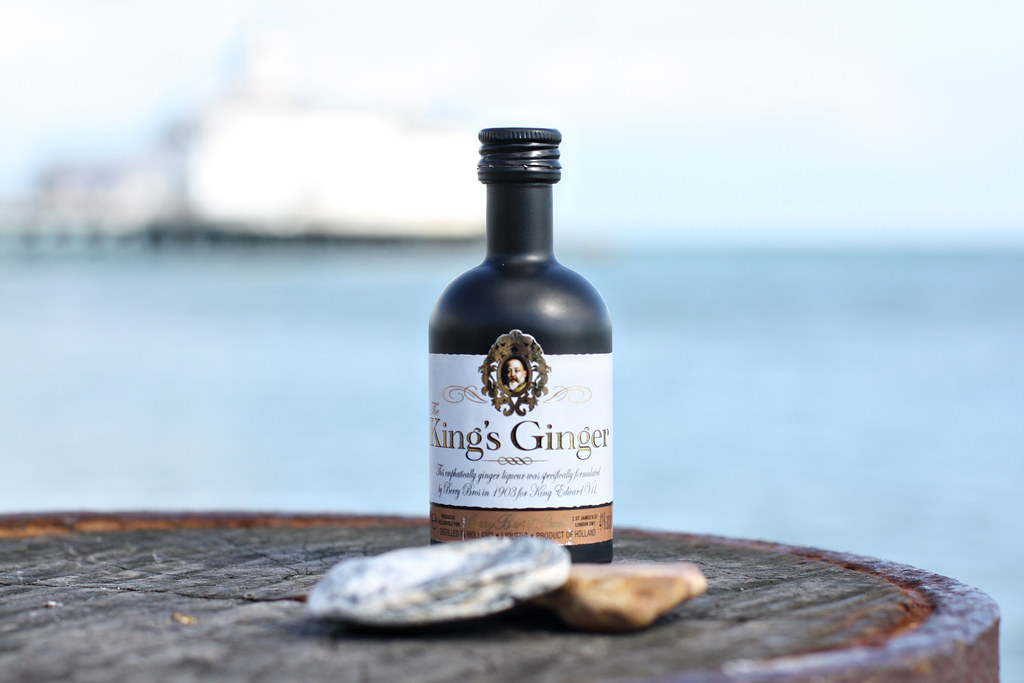 Eastbourne is a funny old place. Well, it’s not actually that old at all, having only been in existence as we know it now, since the 1850s. Before that, it was a collection of four smaller villages or hamlets and it was only when the 7th Duke Of Devonshire, William Cavendish, moved to nearby Compton Place (inherited from his wife Elizabeth Compton who of course couldn’t continue to own it after she got married, the very idea!), that he began to turn it into the town it is today – full of parks and lovely Victorian architecture.

The Duke’s residence, Compton Place, is a stately home that was quite often visited by our hero, King Edward VII, both as a monarch and during his sixty year stint as the Prince of Wales. This is what drew me to visit Eastbourne, of course! There are several records of Edward and Alexandra having stayed at Compton Place with Duke and Duchess of Devonshire, whose hospitality was so good as to have been called ‘regal’.

In 1892, the Prince and Princess’s son, Prince Eddy, the Duke of Clarence (who has been mentioned on here before in association with Jack the Ripper), died of influenza. He was only 28. Wikipedia says that, “the nation was shocked. Shops put up their shutters. The Prince of Wales wrote to Queen Victoria, “Gladly would I have given my life for his”. Princess Mary wrote to Queen Victoria of the Princess of Wales, “the despairing look on her face was the most heart-rending thing I have ever seen.” His younger brother Prince George wrote, “how deeply I did love him; & I remember with pain nearly every hard word & little quarrel I ever had with him & I long to ask his forgiveness, but, alas, it is too late now!”

The Prince on the left at Compton, from around the same (possible the same) time. (source)
After Eddy’s death the Prince and Princess of Wales and their family went to Compton Place to stay with the 8th Duke.  This writer “witnessed the arrival of the bereaved visitors, and will never forget the silent and sympathetic reception accorded to them as they drove from the station through lines of people mostly clad in mourning. The visit benefited all of the Royal Family, and their desire for privacy was carefully respected. When they returned to London, the improvement in their health was obvious; and especially was this the case with the Duke of York.”
Whether he came again in the intervening years, we can only guess. According to Britain’s Finest, ‘he had been the king for only four months when he came to Eastbourne for a royal house party at Compton Place in the company of the Marquis of Abergavenny’. By this stage, much of Compton Place’s grounds had been made into a golf course (but the King’s love of golf is a story for another day).

The reason I have no photos I took of Compton Place is simple – it’s not somewhere you can just turn up to – it’s a stately home but not a National Trust or English Heritage property. I tried to drive there but didn’t fancy being arrested for terrorism (exaggeration, but snapping people’s homes is risky!). Another historical site which I was unable to visit was the Princess Alice Memorial Hospital, named for the King’s sister, who died at of diphtheria in 1878 – precisely 17 years after Prince Albert passed away, sadly enough, after having spent a summer in Eastbourne. Bertie opened it with Alexandra in 1883, when still Prince of Wales. (He also apparently opened Bedfordwell Pumping Station, and the western parades in the same year!). The hospital is now closed, but despite scouring the internet I can’t find anything that says when it closed. Any ideas/history detectives out there?

Luckily, everywhere you look in Eastbourne proper there are reminders of the era we’re remembering. From Queen’s Hotel, built in 1880 and named after Victoria, to the Alexandra. 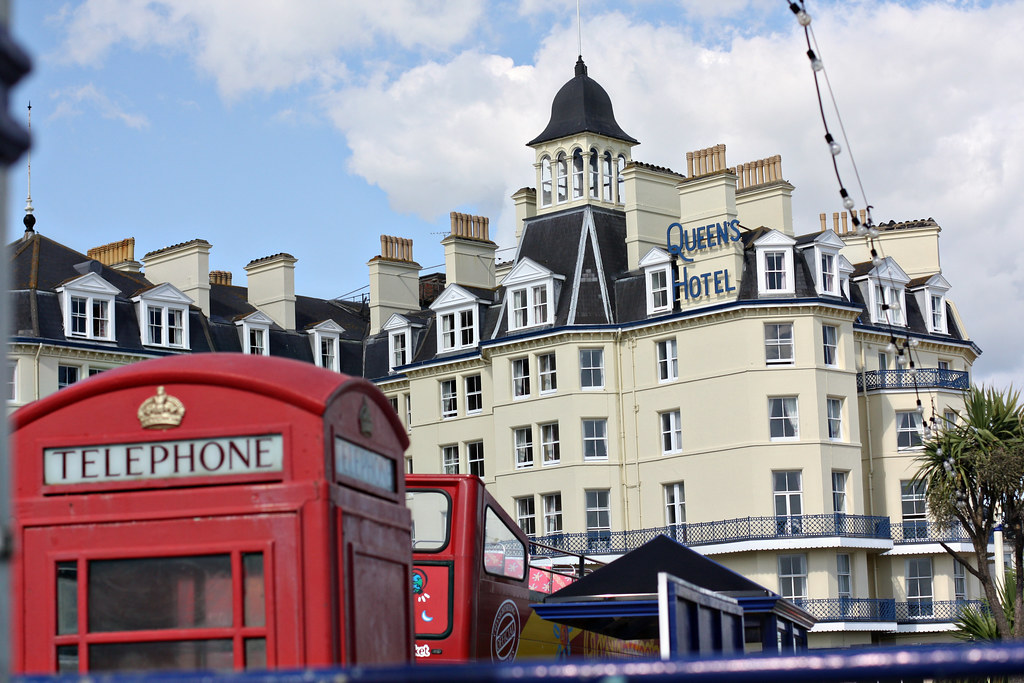 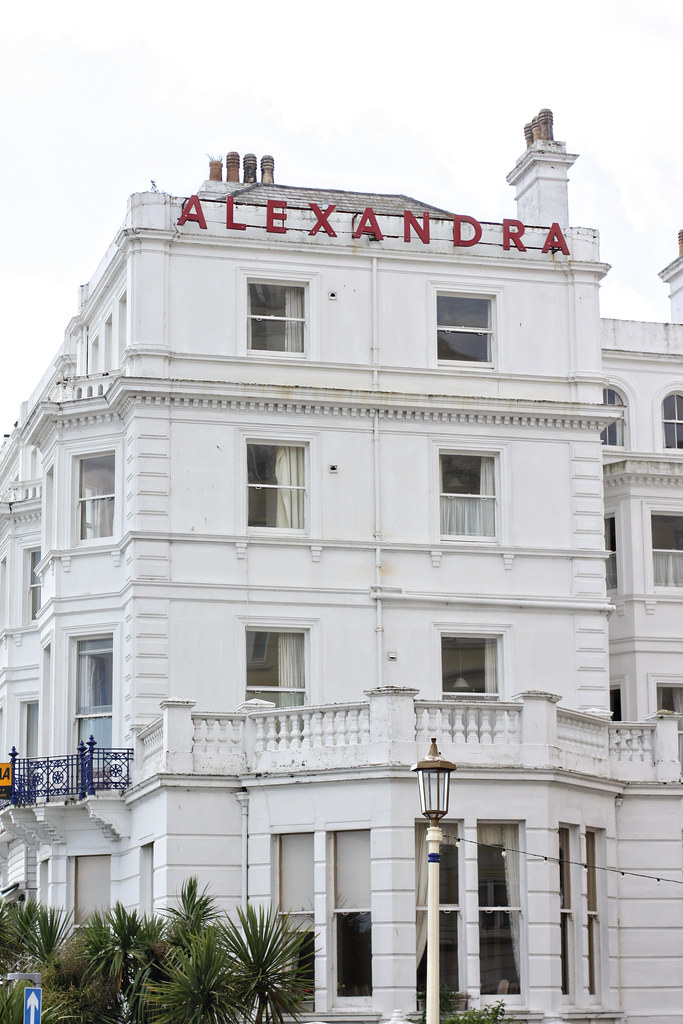 The latter is actually situated on King Edward’s Parade, an Eastbourne street named after no other than you-know-who; although the name did not appear on street directories until 1914. 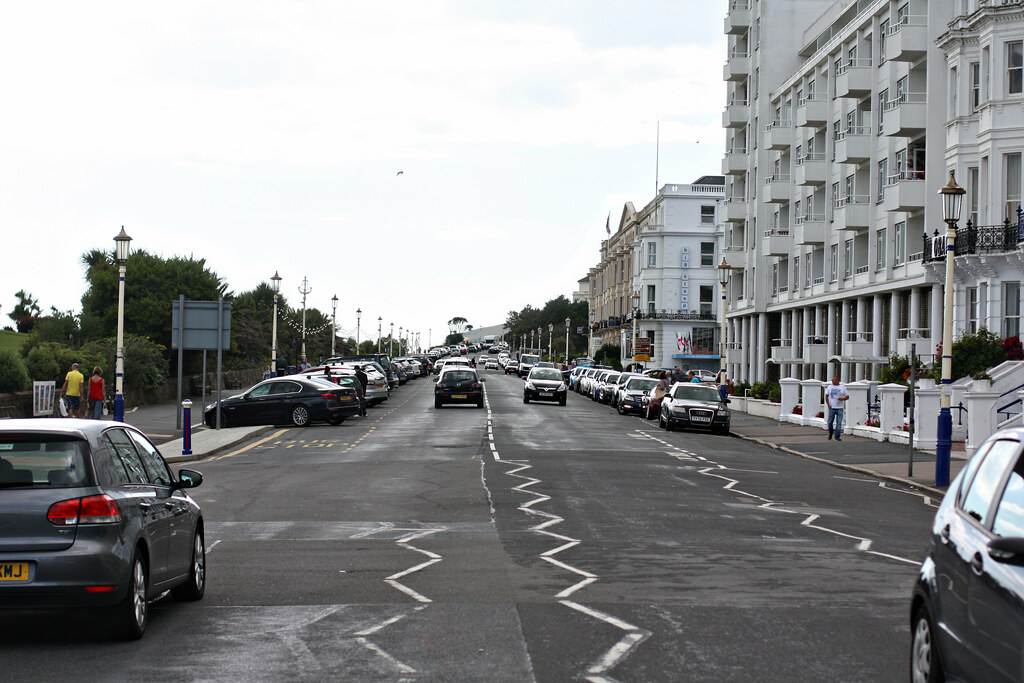 Looking up King Edward’s Parade to the west. 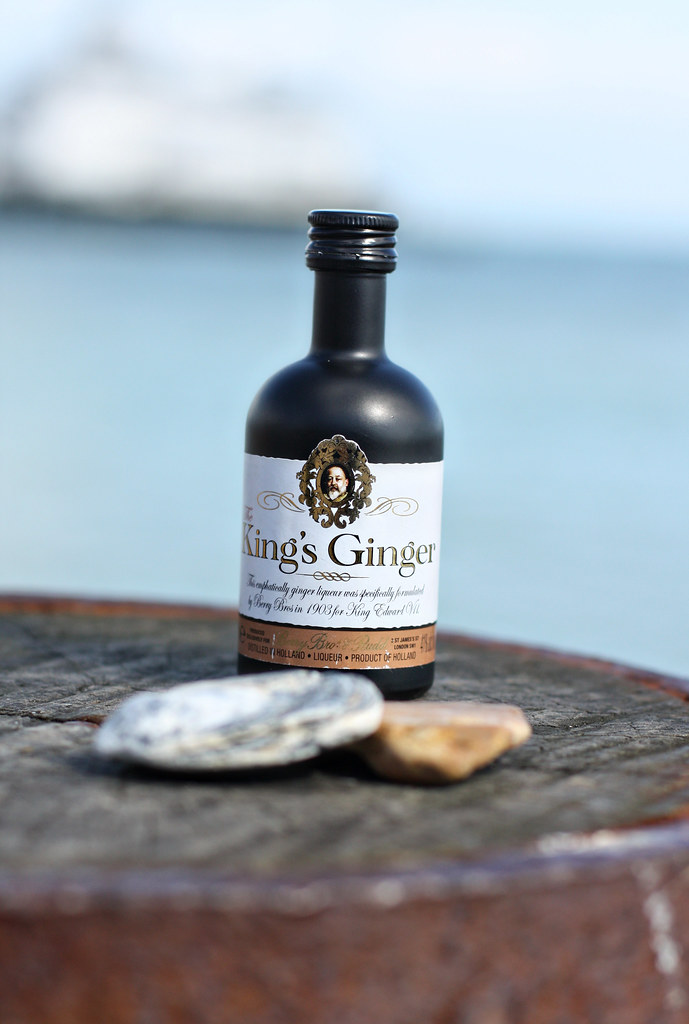 But the other big connection our hero had to Eastbourne is also situated on King Edward’s Parade – the very aptly named Grand Hotel. 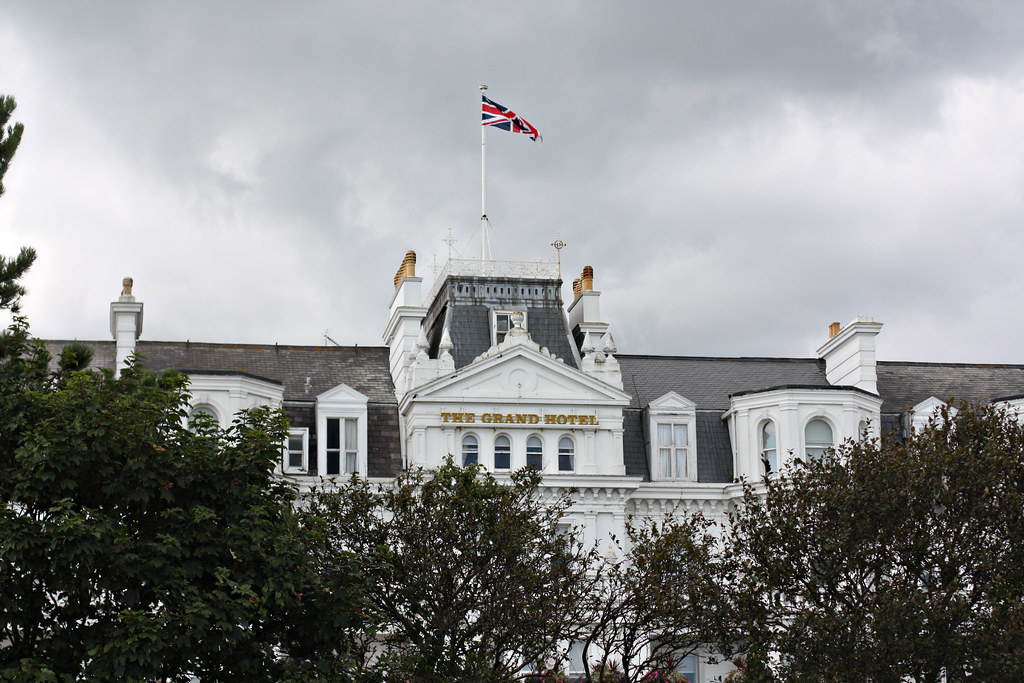 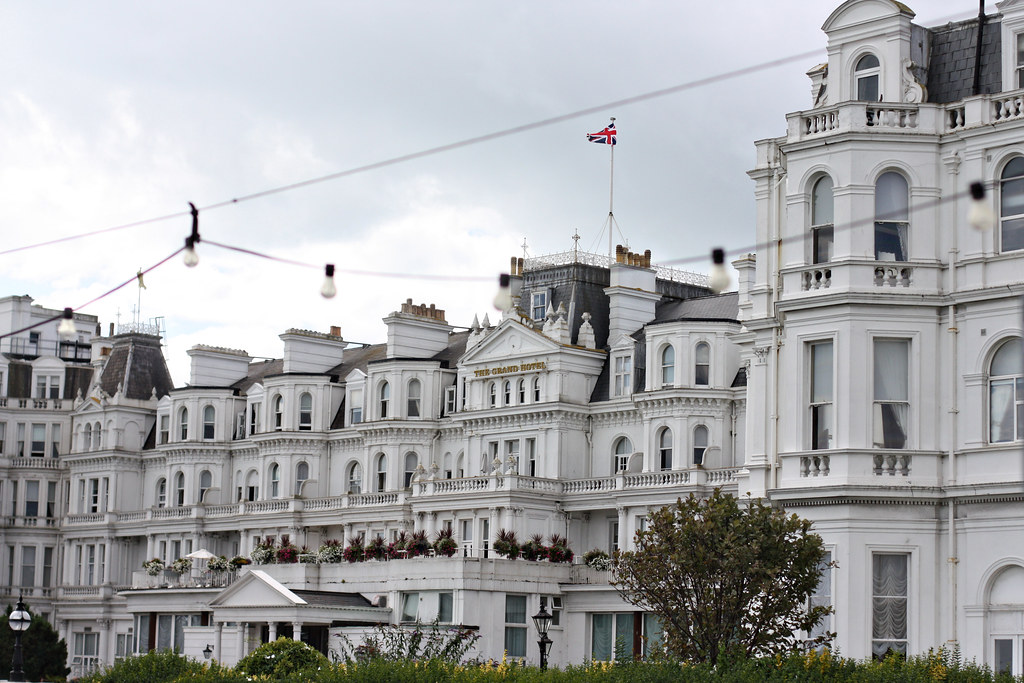 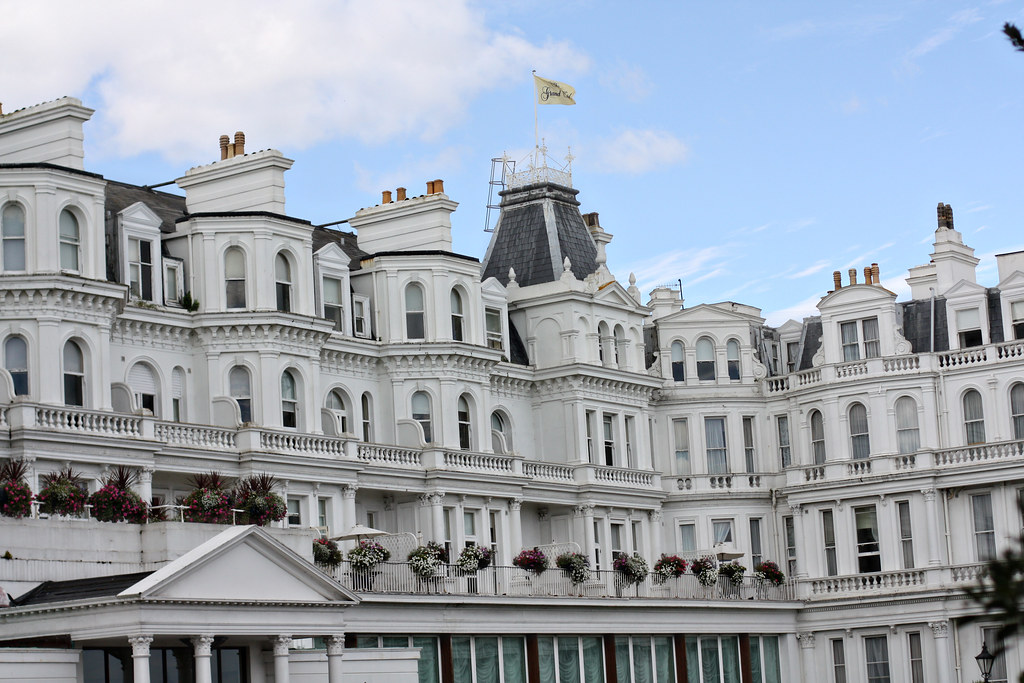 Britain’s Finest says of Eastbourne in 1901, “The Grand Hotel (built in 1875 by William Earp), also known as ‘The White Palace’ was its undoubted showpiece. From the site:

“Dominating the shoreline with its grand stature, this magnificent 19th century hotel is one of the finest of its kind, having welcomed a galaxy of the great and the good including Winston Churchill, Charlie Chaplin, Arthur Conan Doyle and King Constantine of Greece.

On the 13th May 1874 the Eastbourne Gazette announced that local resident William Earp was proposing to build a magnificent hotel with a 400-foot frontage at a cost of £50,000.  The result was The Grand Hotel, constructed in 1875 in a superb position facing the sea, with views of Beachy Head, surrounded by ornamental gardens and tennis courts.

The Grand Hotel was built when the upper classes ruled the land and took their holidays by the sea, sometimes months at the time, taking with them their entire staff.  The Grand Hotel is famous for its long association with music.  Debussy completed his symphony ‘La Mer’ in Suite 200 in 1905.” 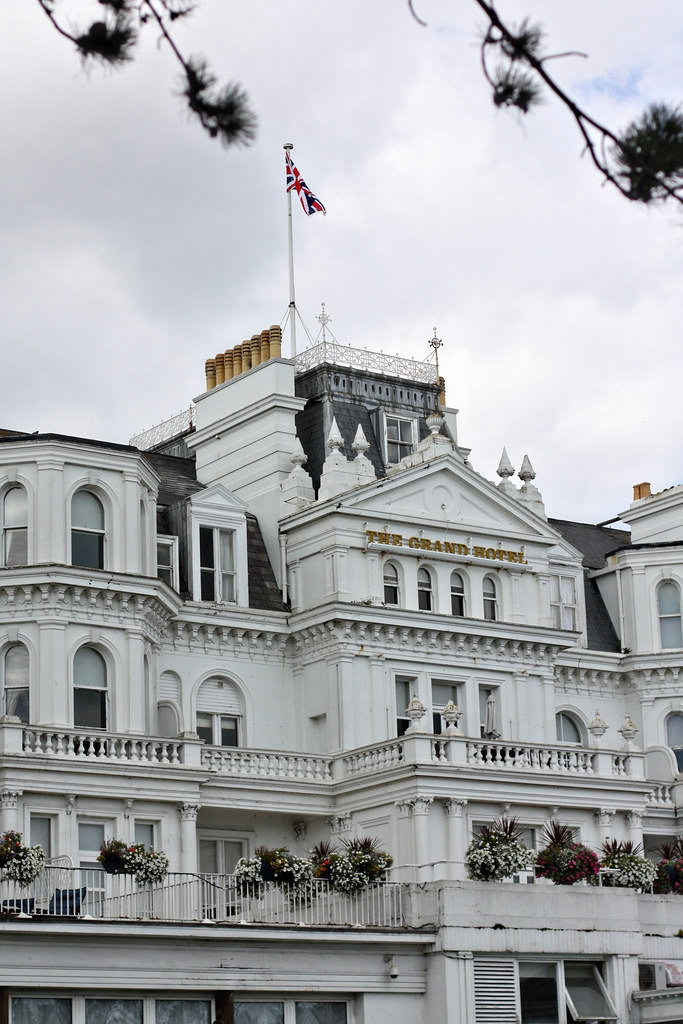 Before leaving Eastbourne, the king inspected the hotel.” Presumably, it got his stamp of approval.
By lovely coincidence, as I walked past the entrance, this fabulous old Rolls Royce appeared! 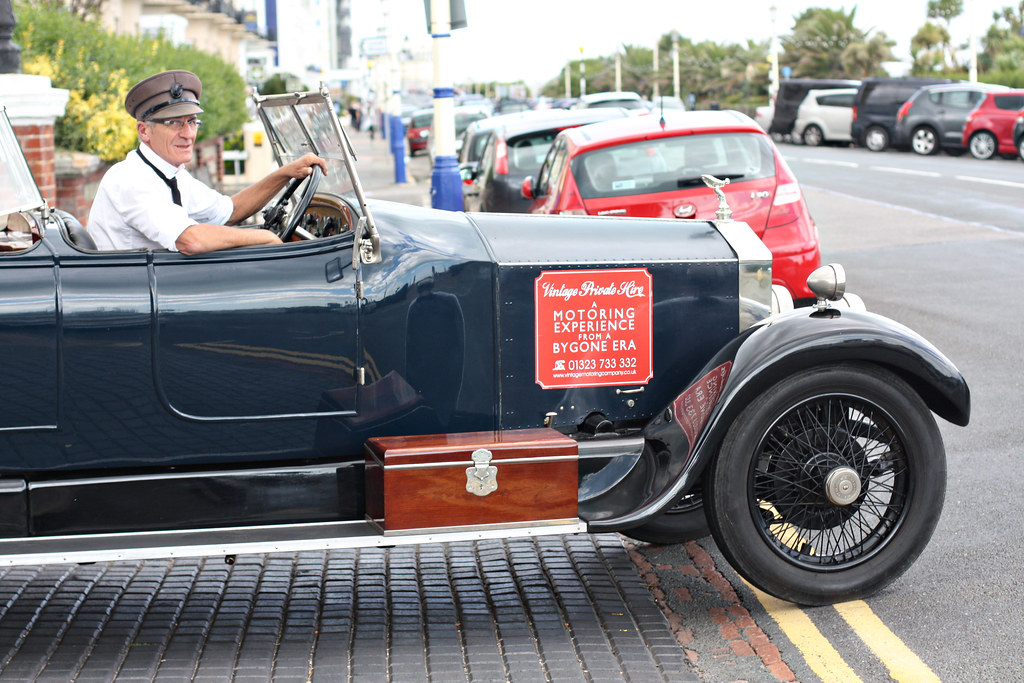 I had a quick Google and, as it dates from 1927 the 20-horsepower Rolls-Royce tourer is technically a little too futuristic for this piece, but the Vintage Motoring Company looks brilliant and I hope to take one of their tours one day! 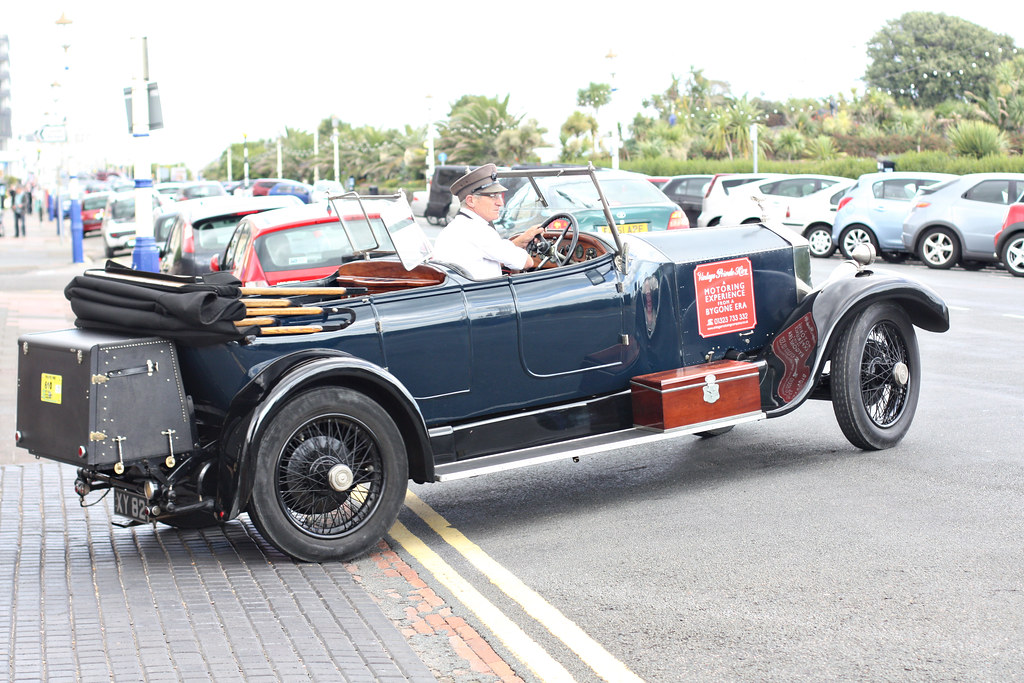 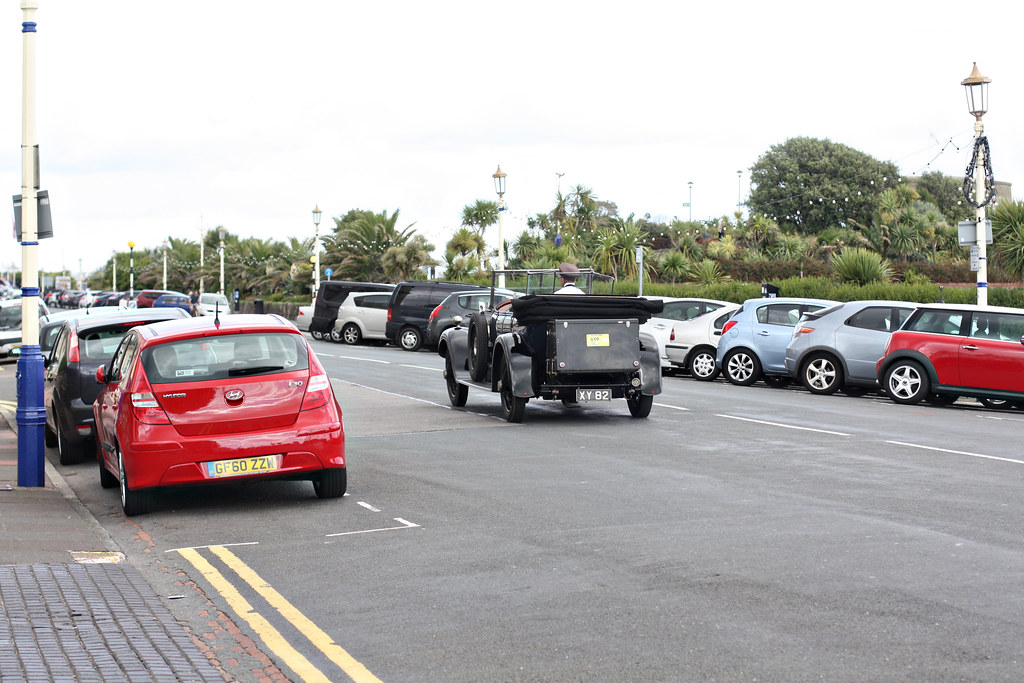 There was only one thing left to do to finish off my seaside trip – fish & chips on the beach! 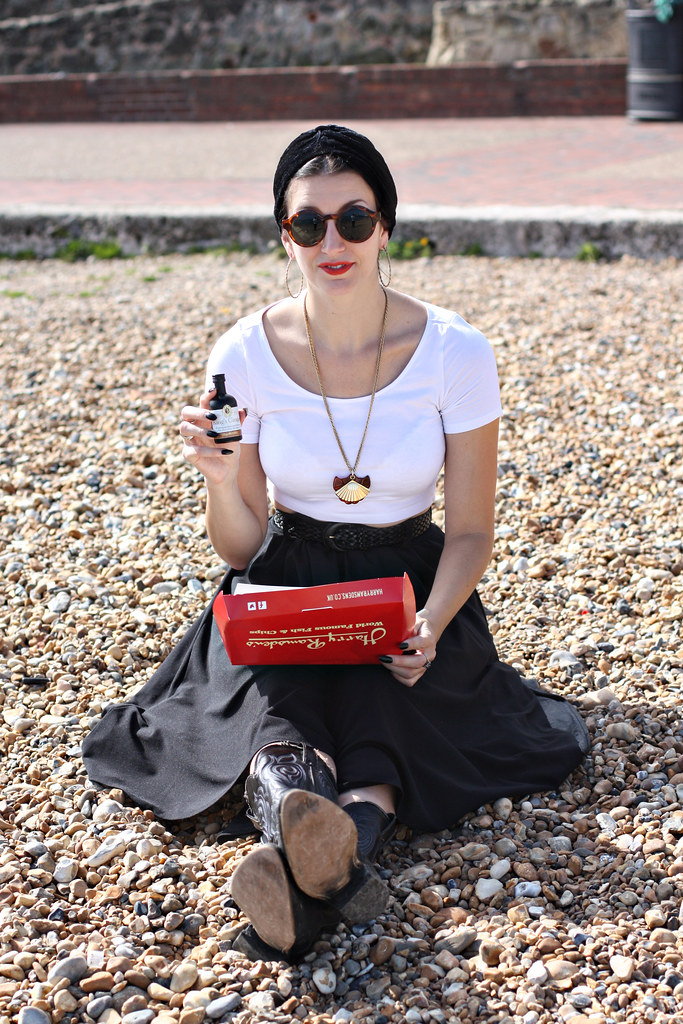 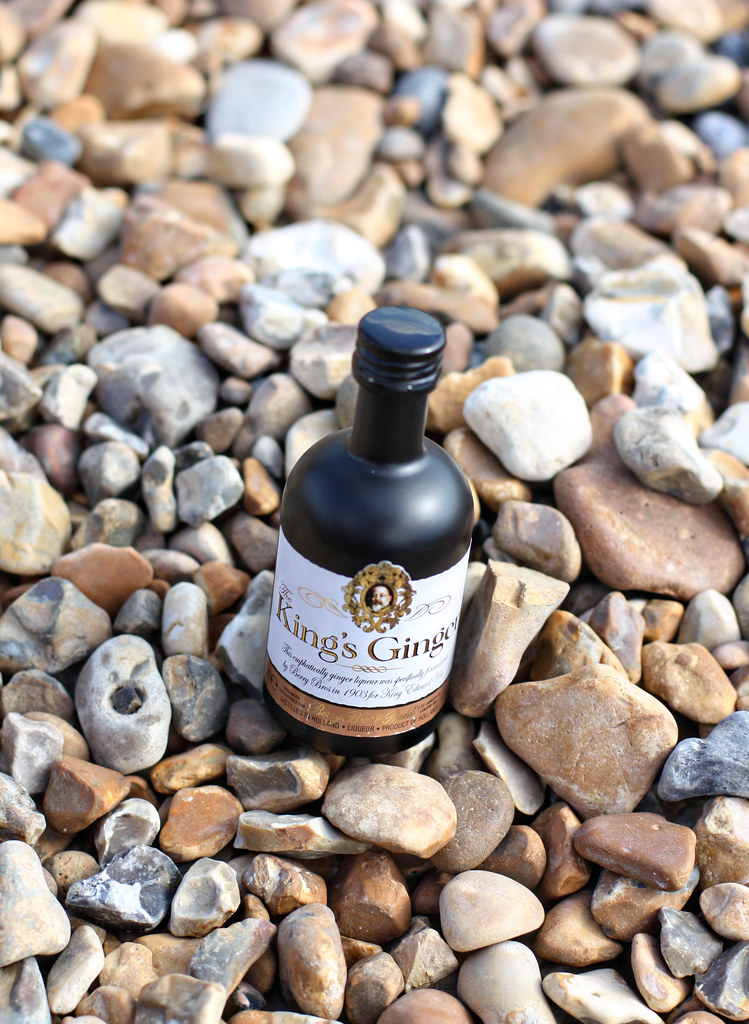 Eating fish & chips on the beach is a challenge, because of the seagulls. But I managed. I’m a straightforward salt & vinegar on my chips kind of a person… but maybe this is a condiment to try for your future supper? 😉 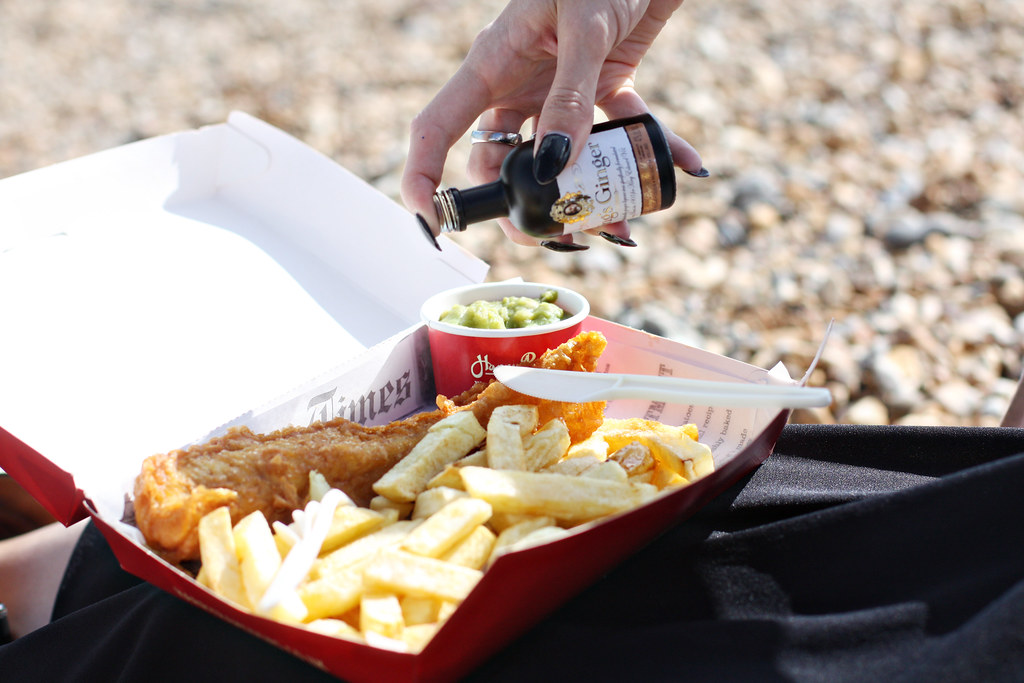 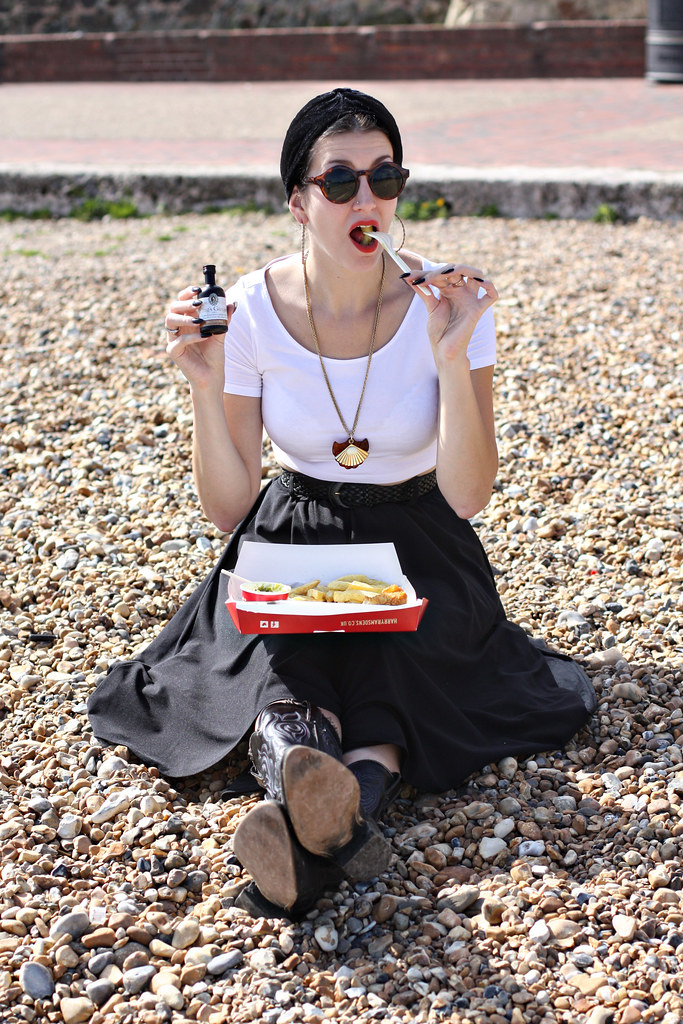 …no? Then how about this instead. Go to what may be the best Italian gelateria in the South – Fusciardi’s – on Eastbourne’s Marine Parade since 1967, buy a giant cone (mine is sea-salted caramel on the bottom and vanilla on the top) and douse liberally with The King’s Ginger! 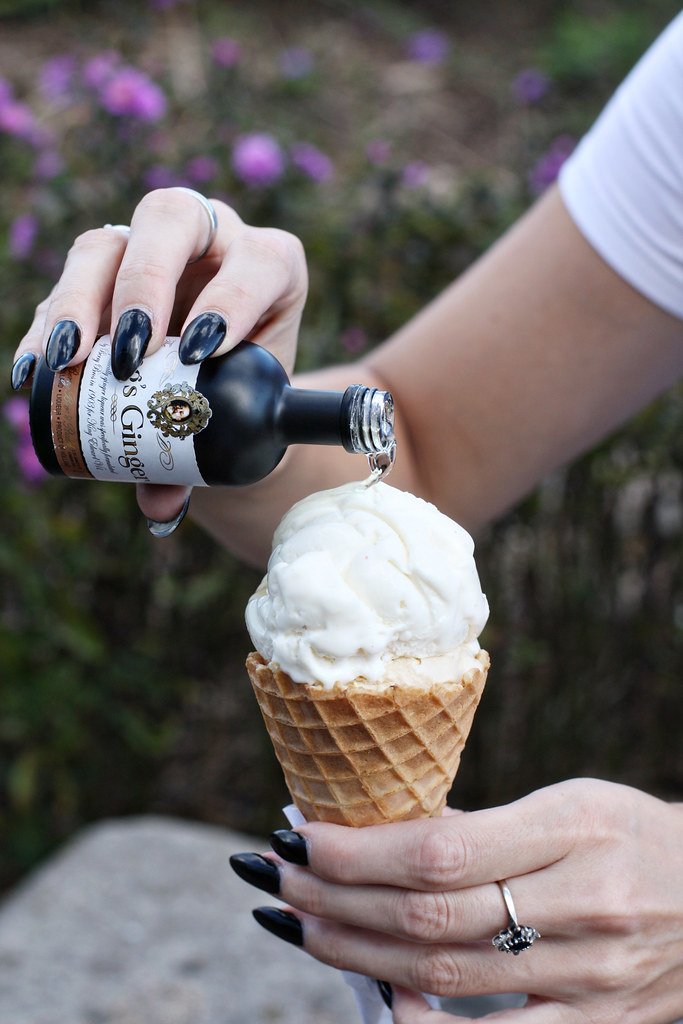 DO try this at home!
I took so many pictures in Eastbourne that I’ll on it post again – including outfit deets, so check back soon! And please check out The King’s Ginger as well… now that it’s getting closer to autumn it’s a cocktail cabinet essential, and no mistake!

I love Eastbourne – it's deliciously grand and grotty.

Did you know that when it was being built, they also built poorer suburbs – but the builders had to walk the long way round (they were forbidden from walking THROUGH the town) to get home to them? It was that exclusive!

My good friend moved to Eastbourne ages ago and I've not been to see her. More fool me as from your pics it's as good as she says. You've sold Eastbourne to me and as I like anything with ginger in it, perhaps I should copy your day out! ( But with my friend added and me wearing a wide skirted dress)
Love your pendant by the way!

I am crazy in love with your outfit. I haven't had cowboy boots since I was a teenager (I have hard to fit feet, particularly thanks to oddly high arches, and cowboy boots ten to be one of the trickiest types of shoes to find a comfy pair of for me), but this fab fusion look is making year for some more than I have in many years. Perhaps the thrift store gods will smile on me and send a comfortable pair my way soon.