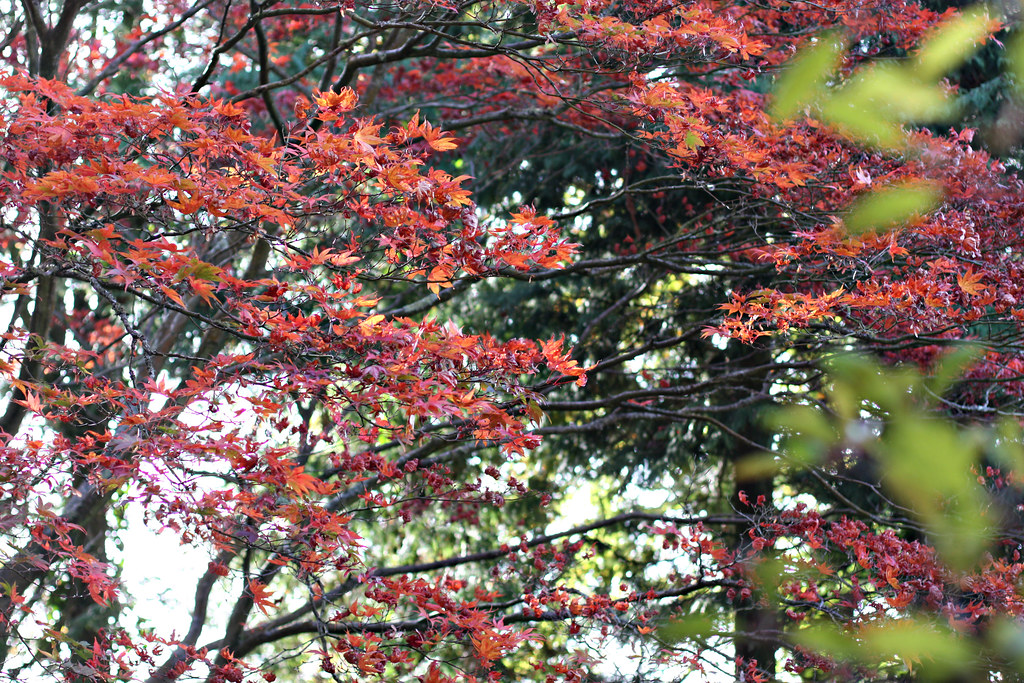 Today I’m going to tell you a little story about the formation of what might be the most quintessentially British thing ever… mainly because it’s been ensuring that large swathes of our precious countryside and many of our historical stately homes remained preserved for generations to come. It also has a little to do with our good friend King Edward VII and therefore The King’s Ginger… and what better excuse to show lots of gratuitous shots of English countryside in the autumn? Today’s King’s Ginger story is about the one and only National Trust. 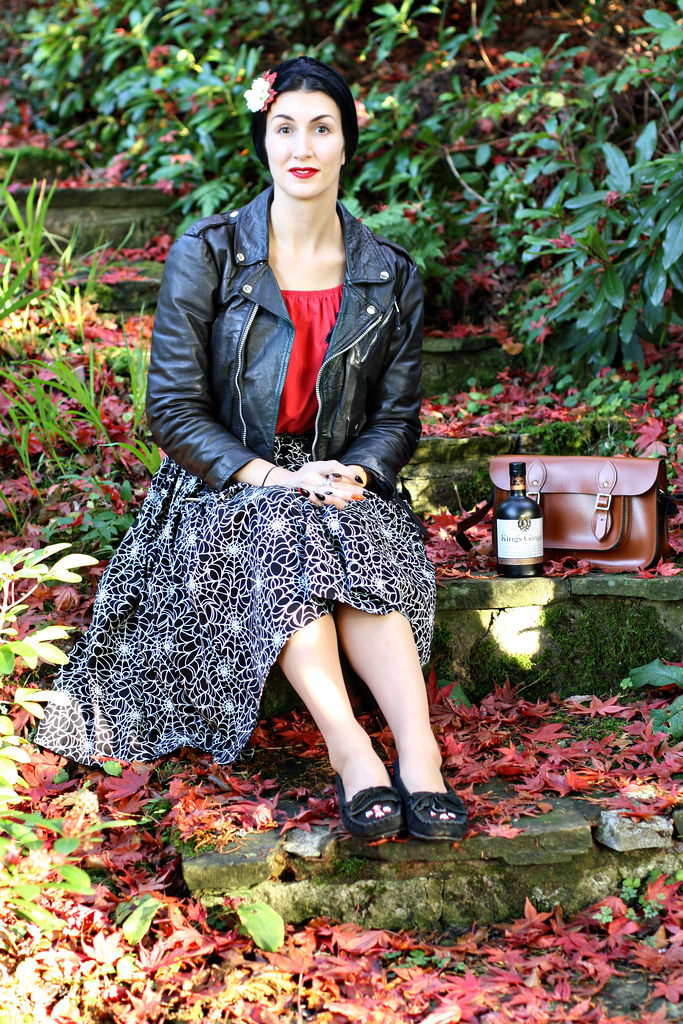 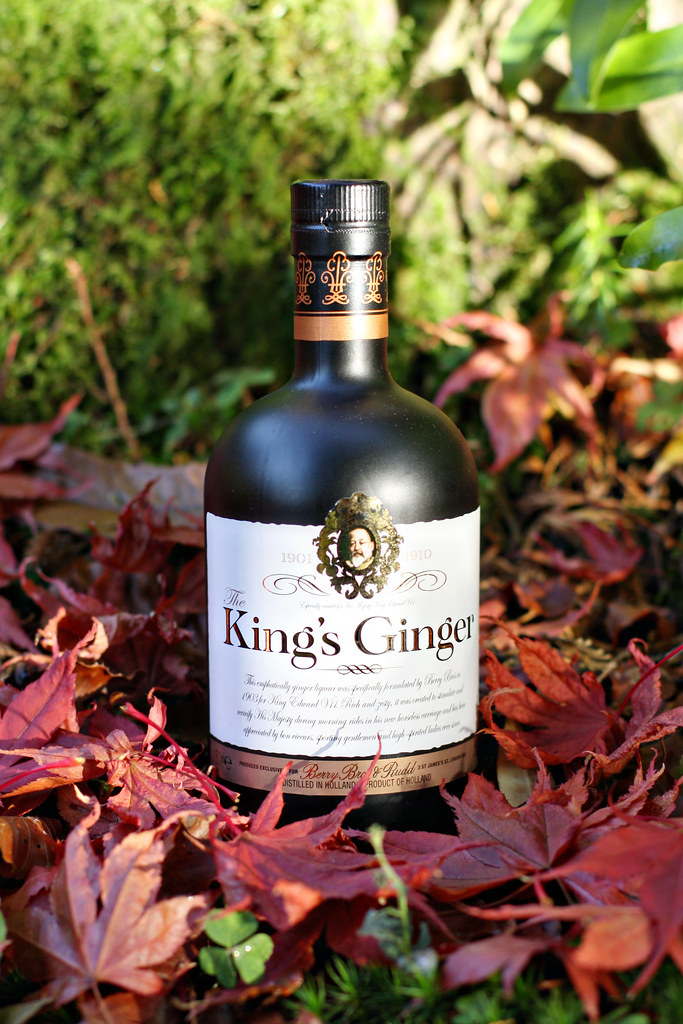 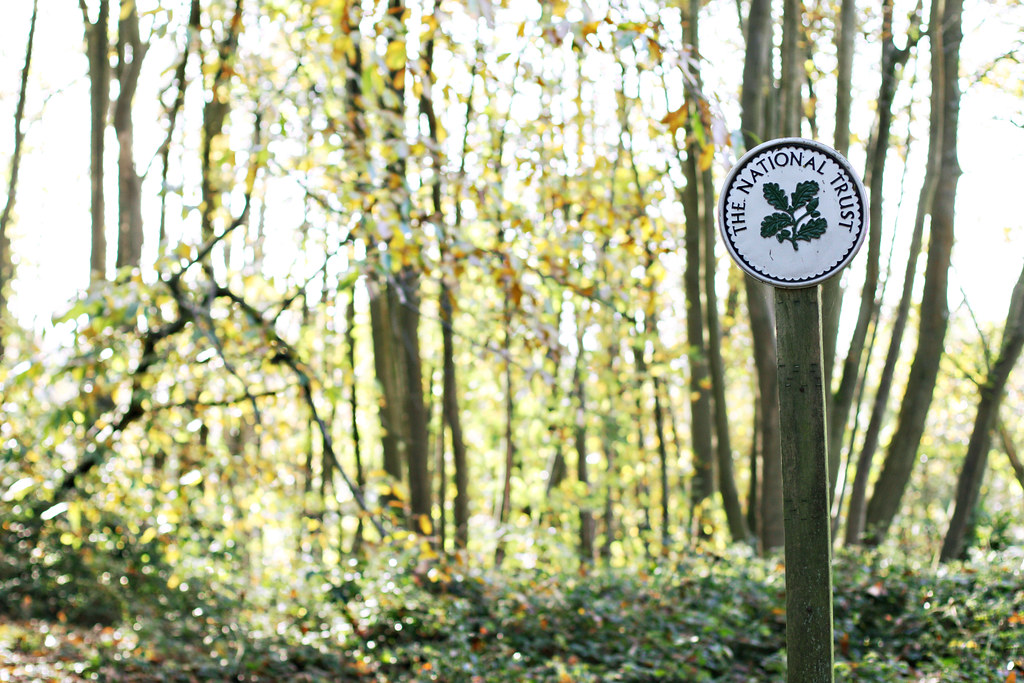 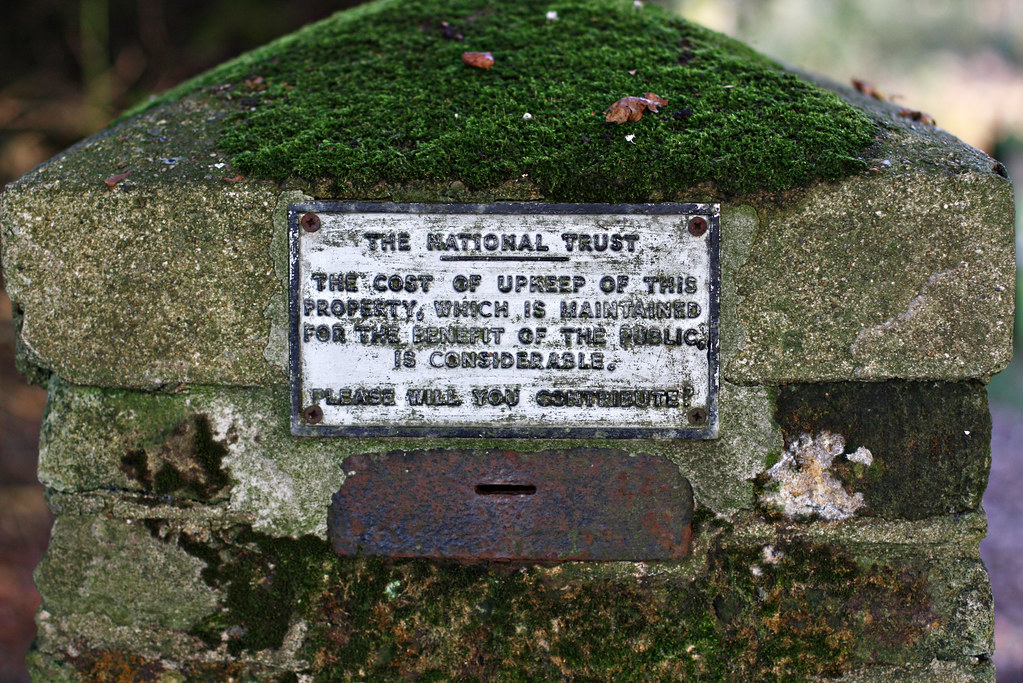 National Trust for Places of Historic Interest or Natural Beauty, to give it its full name, was first formed in 1895 by three pretty amazing people. The first I’ll talk about was Octavia Hill, a no-nonsense lady who pioneered housing for the poor, fought tooth and nail to prevent the destruction of inner city forests and green spaces like Hampstead Heath and Parliament Hill Fields, first coined the term ‘Green Belt’ and firmly believed in ‘the life-enhancing virtues of pure earth, clean air and blue sky’ for all people, especially the urban poor’. She was much admired by everyone from the working class to royalty – Queen Victoria’s daughter and King Edward’s sister, Princess Alice of Hesse-Darmstadt, was once taken on a tour of some of Hill’s properties, incognito. Before the formation of the NT, Octavia Hill became the treasurer of the Kyrle Society, whose slogan was “Bring Beauty Home to the Poor” and, among other cultural things, aimed to bring open spaces into the lives of the inner city working class folks. It formed something of a blueprint for the NT proper. 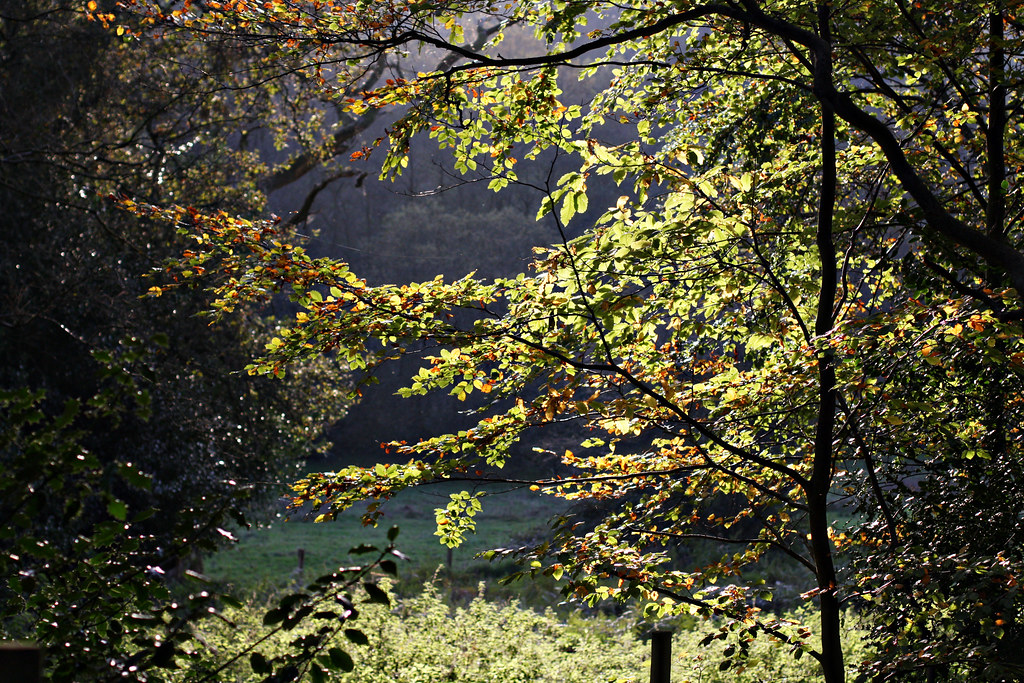 The second of the trio was Hardwicke Rawnsley – a clergyman, poet and conservationist. Rawnsley resided in the Lake District and, together with Octavia Hill and our third National Trust hero Sir (then plain old Mr) Robert Hunter, had managed to successfully campaign to prevent the construction of railways to carry slate from quarries in the fells above nearby Buttermere, which would have ruined the unspoilt valleys. That was in 1883, and a decade later Rawnsley dreamed up the National Trust, an organisation that could purchase and preserve places of natural beauty and historic interest for the benefit of the rest of the population. 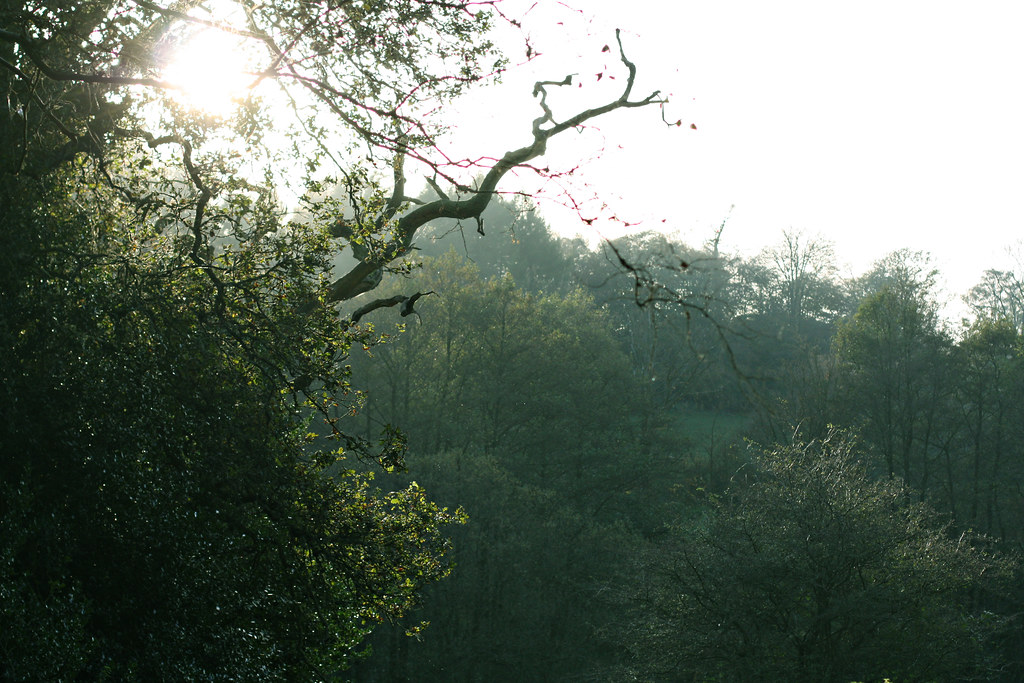 The third and final piece of the National Trust puzzle was the aforementioned Sir Robert Hunter. From as early as his 20s, Hunter was interested in conservation (perhaps you’re sensing a theme here?) and in 1866, he wrote an essay entitled ‘The Preservation of Commons in the Neighbourbood of the Metropolis”, many of the principles of which were actually incorporated into English law just under a decade later. His day job was as solicitor to the General Post Office but he worked with the Commons Preservation Society to help Hill save Hampstead Heath and Rawnsley with the Lake District campaign. According to Wikipedia, ‘One of Hunter’s most celebrated successes was the rescue from enclosure of 3,000 acres of Epping Forest, with the support of the corporation of the City of London. The case was bitterly contested across three years. Hunter acted with the corporation’s solicitor, Sir Thomas Nelson, in the conduct of the legal proceedings. In 1882 Queen Victoria went to the forest and formally declared it “available for her people’s enjoyment”.’ 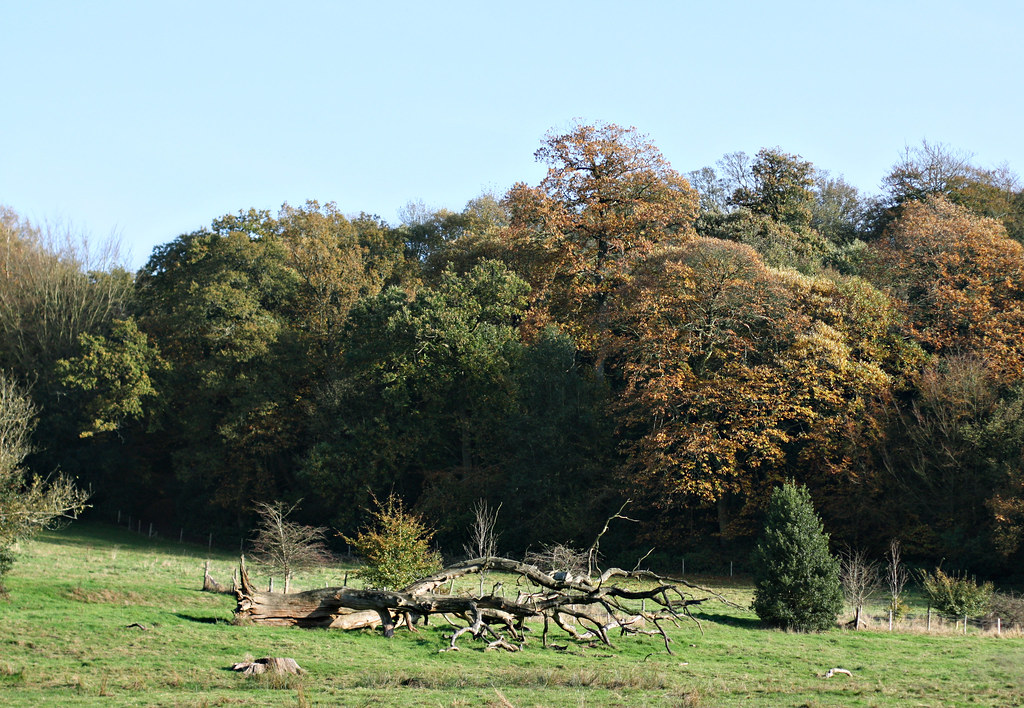 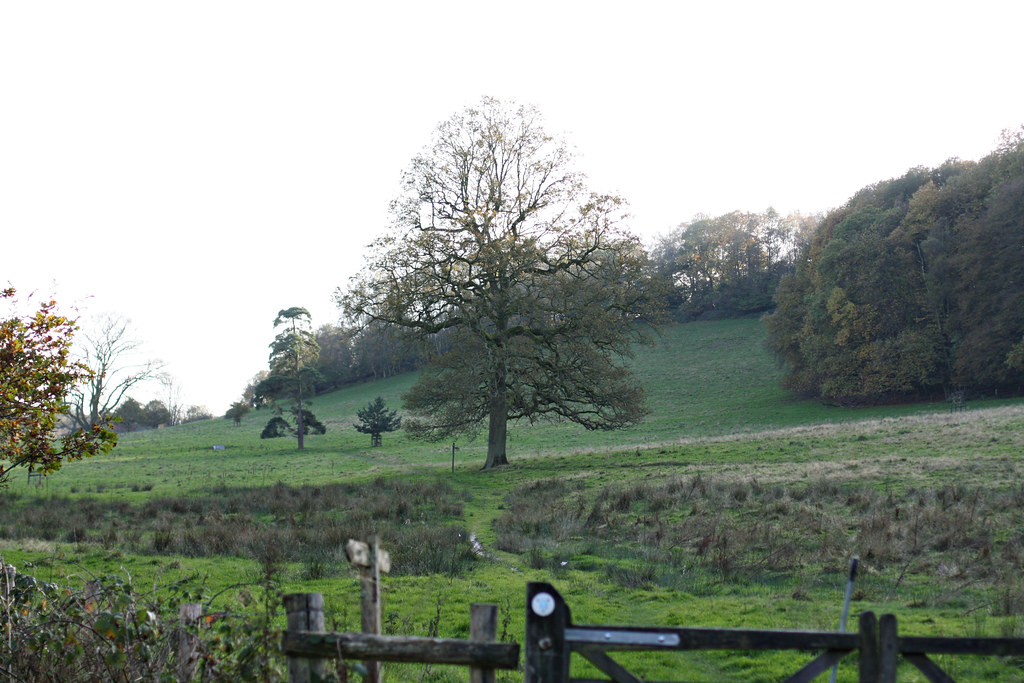 After these successes the logical next step was for the three of them to set up an even bigger body to save even bigger bits of countryside.

“In November 1893 Hill, Hunter and Rawnsley met at the offices of the Commons Preservation Society. They agreed to set up a national body, to propagate the formation of a “National Trust for Places of Historic Interest or Natural Beauty”. In July 1894 the trust was formally inaugurated under the presidency of the Duke of Westminster. At the inaugural meeting Rawnsley declared, to cheering, that the aim was to establish “a great National Gallery of natural pictures”. Hunter was appointed chairman of the executive committee. In the same year he was knighted for his services to conservation.” (Hunter was also honoured again in 1909 for King Edward VII’s birthday). 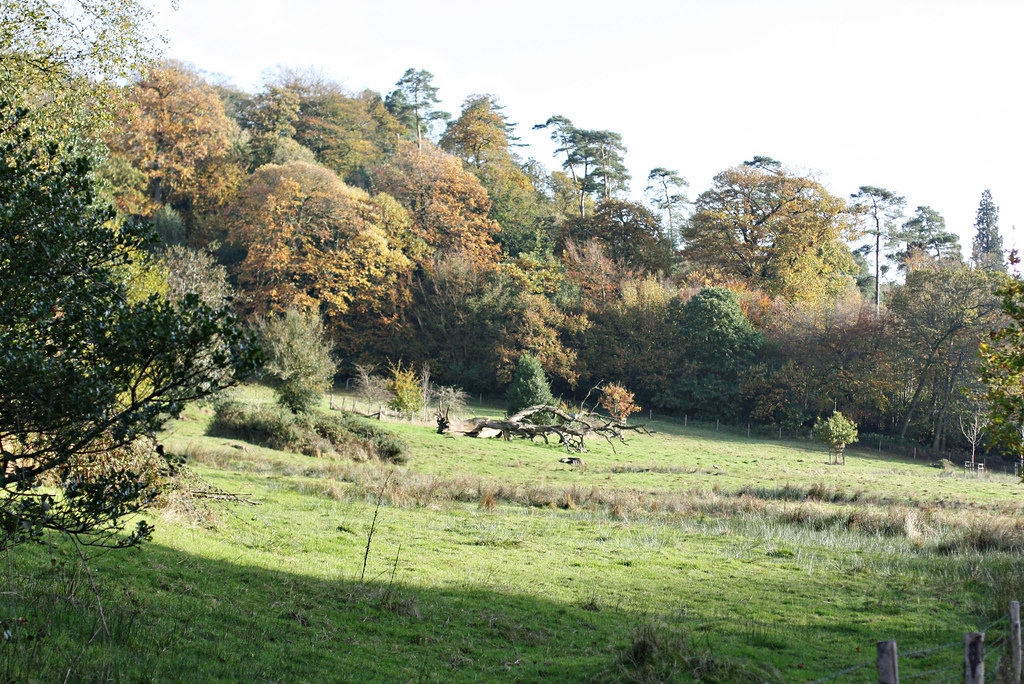 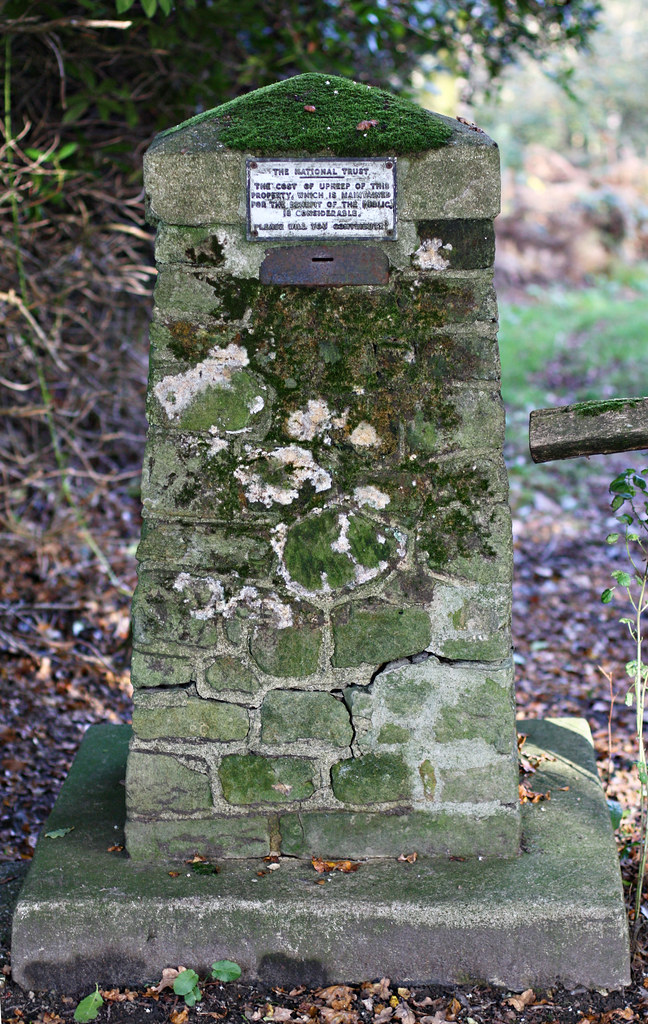 And the rest was history, really. It took until 1907 for the National Trust to be formalised, after Hunter drafted the 1907 National Trust Bill, which was passed by parliament the same year.  Soon after its 1895 formation though, Hunter organised a public subscription to buy a big chunk of Hindhead Commons including the Devil’s Punch Bowl, which became one of the Trust’s earliest acquisitions. 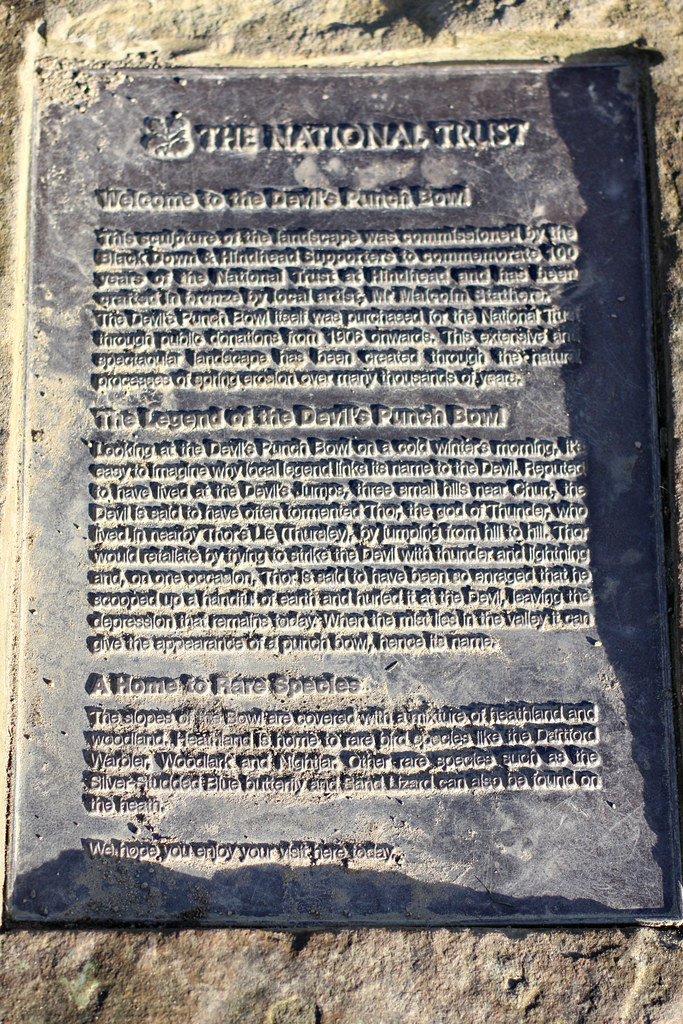 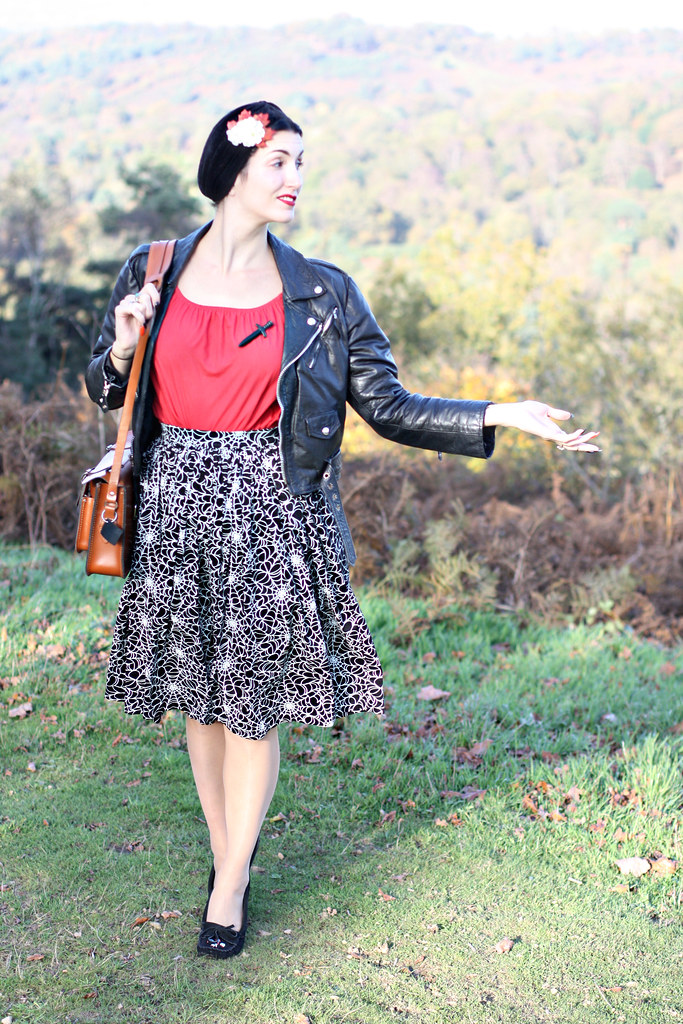 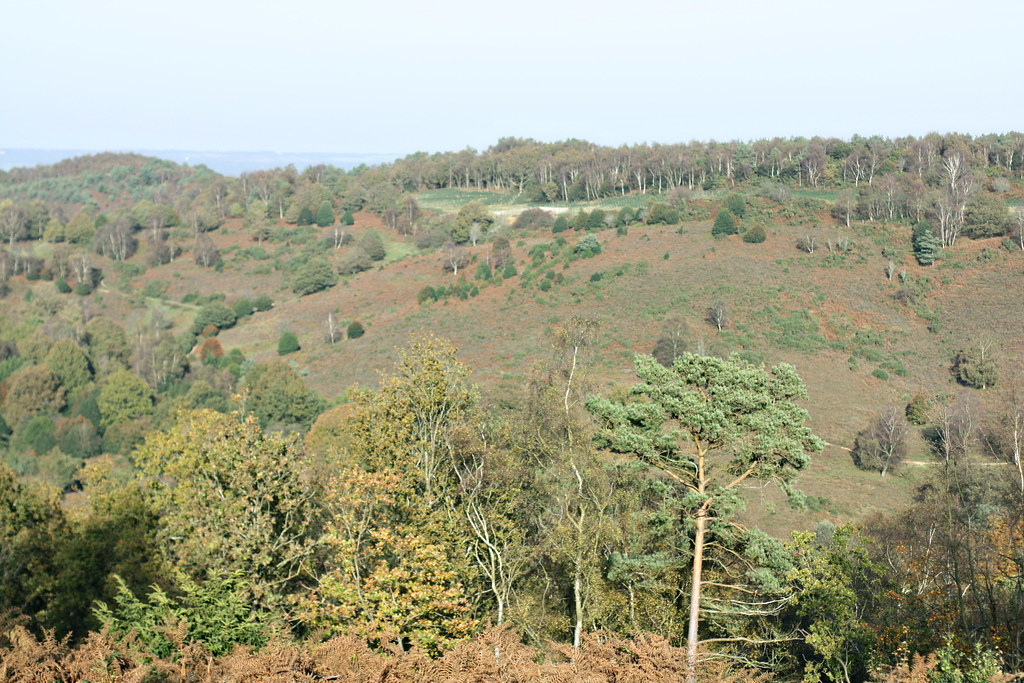 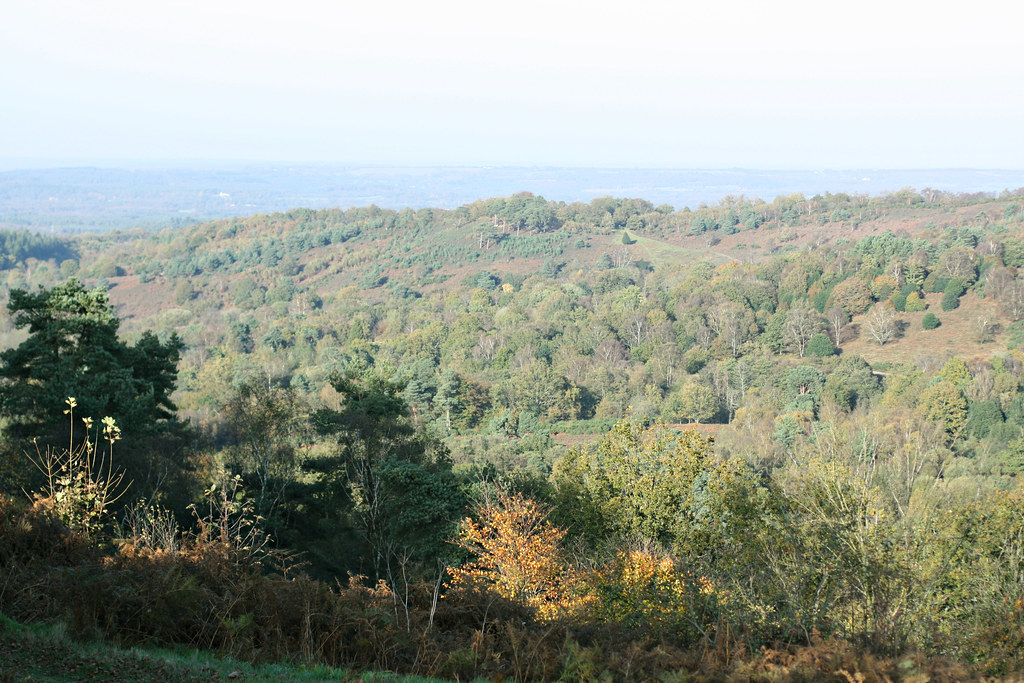 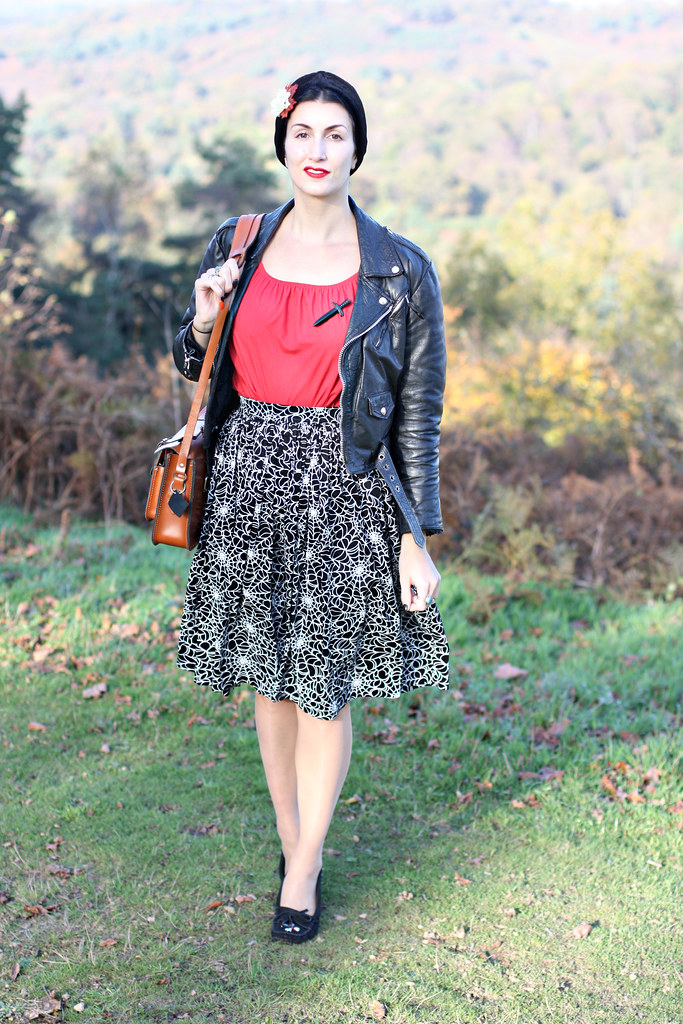 The Devil’s Punch Bowl is where Sir Arthur Conan Doyle (also knighted by King Edward VII in 1902), who lived nearby at Undershaw from 1897-1907, went walking and found his inspiration for the Hound of the Baskervilles. Since the A3 underpass was built, it’s also amazingly quiet. I doubt it has changed much in the last century and a bit…

So, what about some other ties to our hero? As well as being appointed as chaplain in 1912 to King Edward VII’s son George after the former’s death, Rawnsley also happened to be related to Alfred, Lord Tennyson, whom I’ve mentioned on here before. It’s very fitting that large swathes of the beautiful land around the area I mentioned in the previous blog were donated to the National Trust in 1948. Here’s two such signs I snapped while on my photo-gathering field trip around the area! 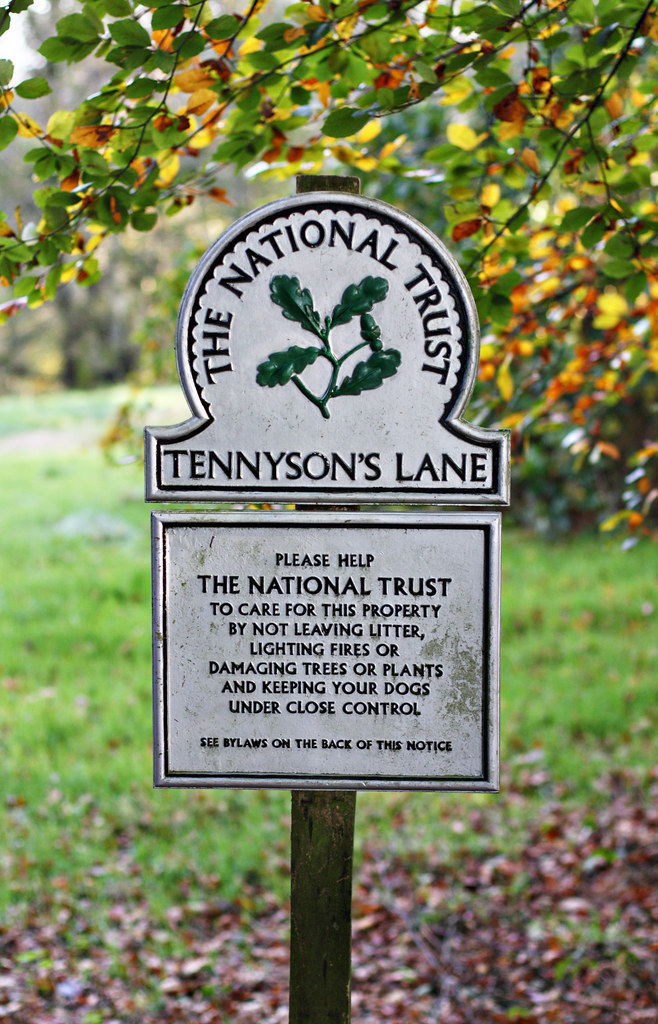 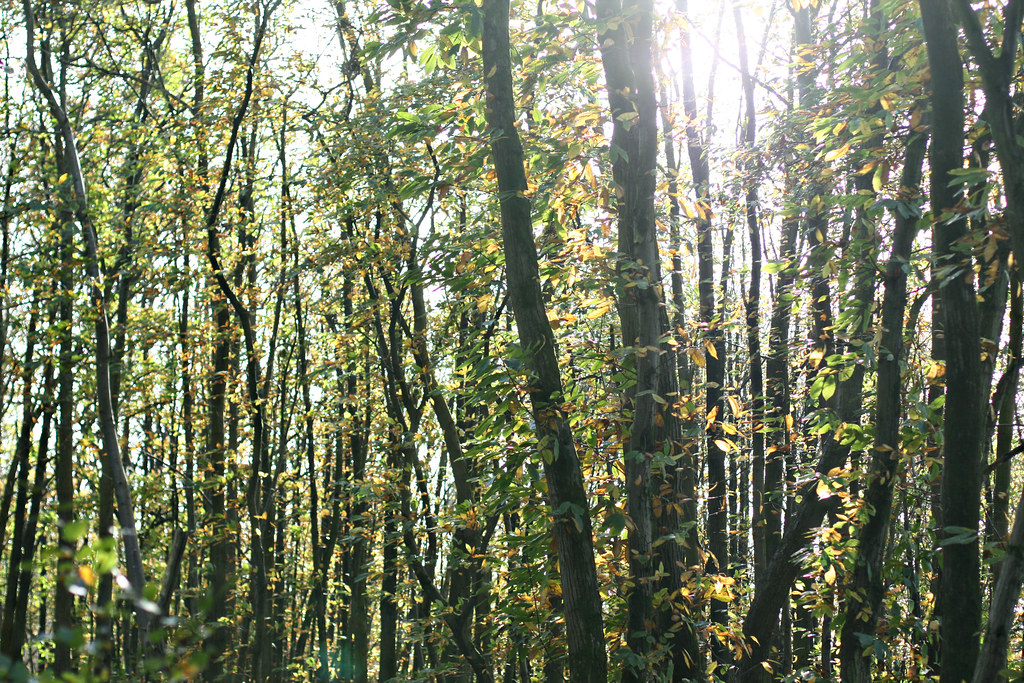 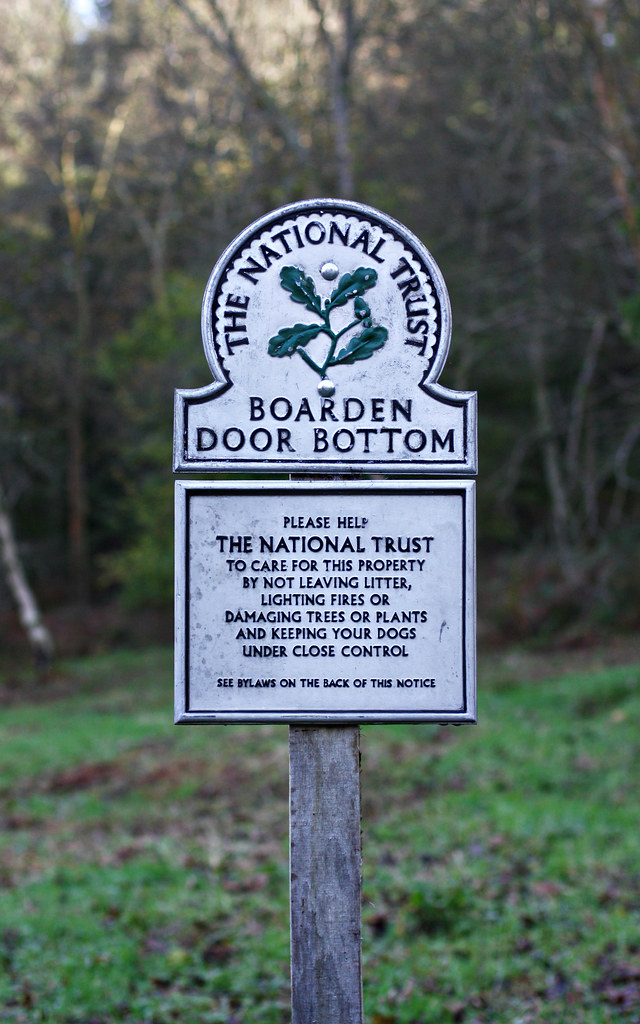 There are some interesting plantings around the area, from ornamental trees that were probably planted so that Victorian or Edwardian visitors could perambulate around the then common land, and Norwegian spruces that were planted in later decades, in stark contrast to the usual leafy, deciduous trees native to the area. 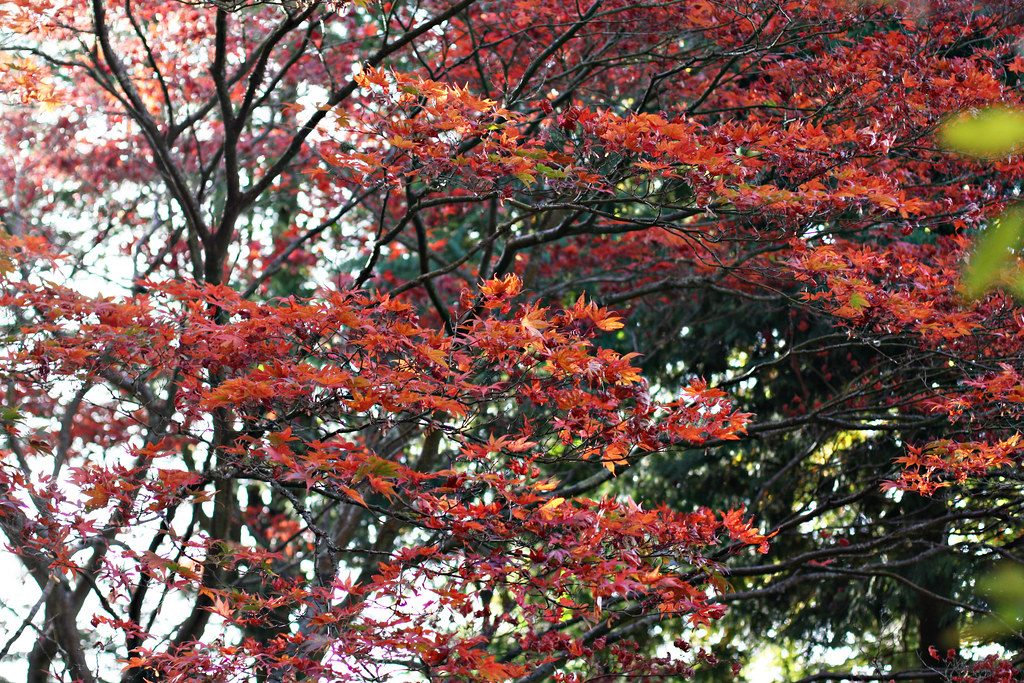 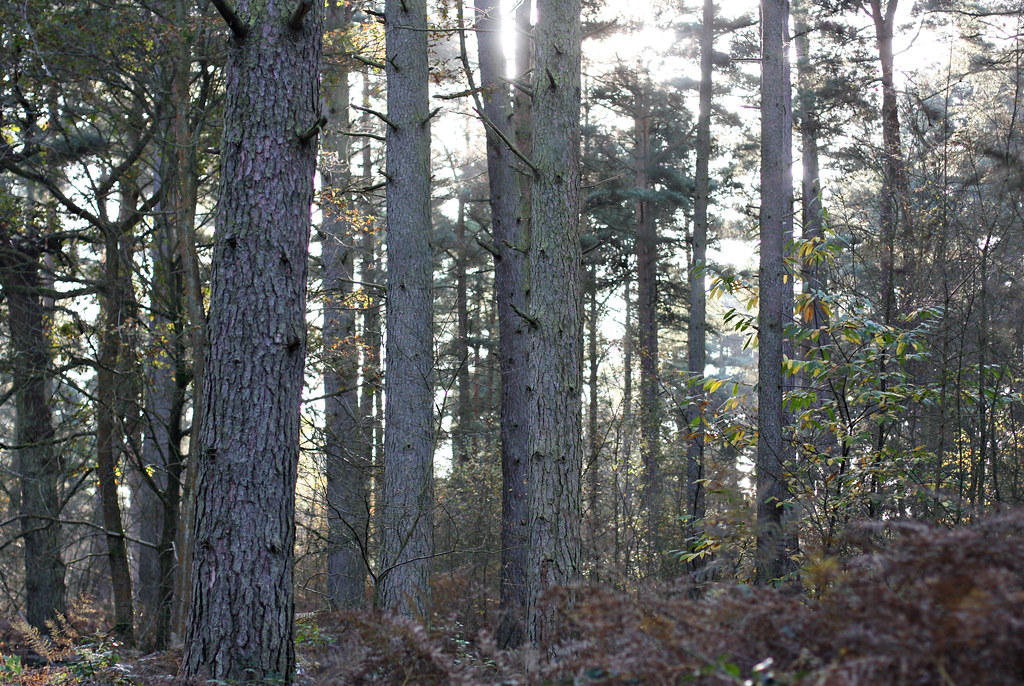 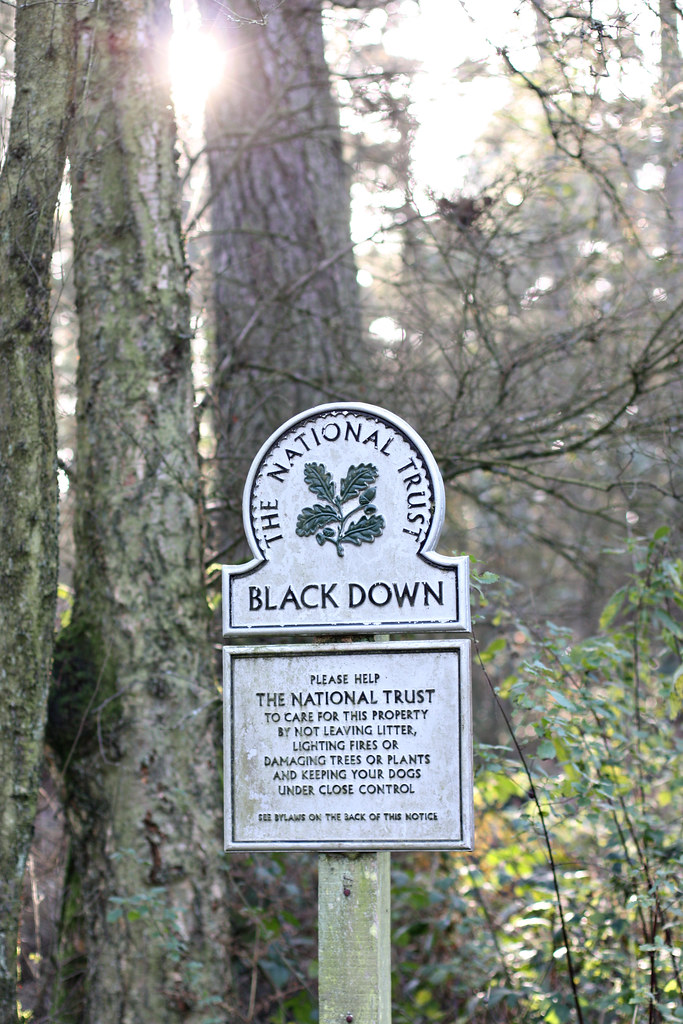 It’s quite amazing to think that because of a few people’s passion and far-sightedness, our generation and those to come will always have these stunning bits of countryside to enjoy, for free, forever. Well hopefully forever. And the autumnal nature is the best place to enjoy a tipple too, of course. No recipe this time – you should just enjoy a bracing walk on your nearest National Trust ground and a nip of neat King’s Ginger this season! 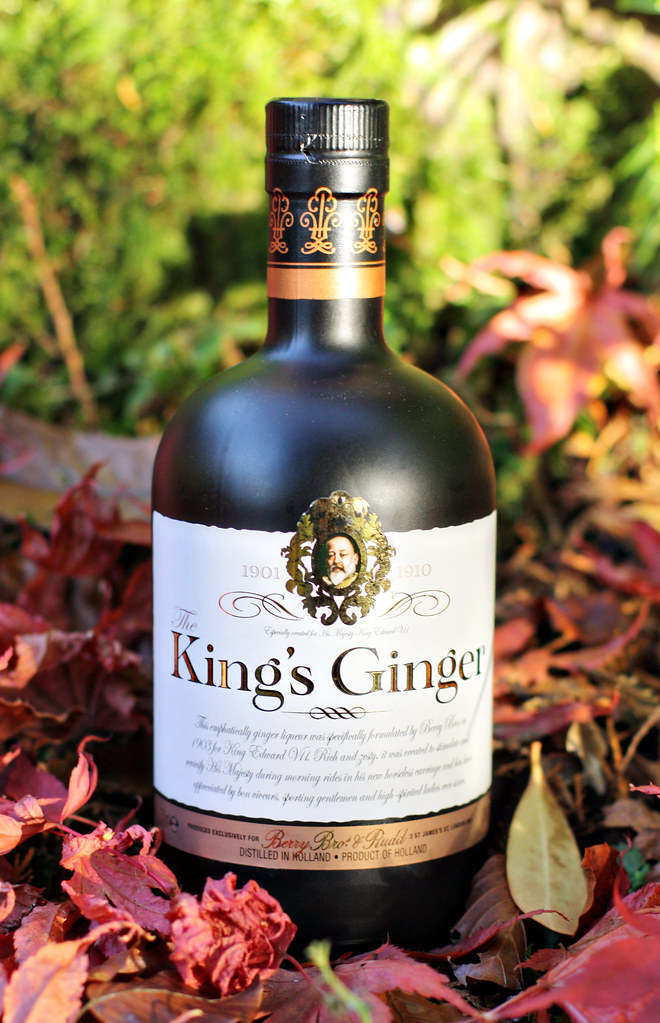 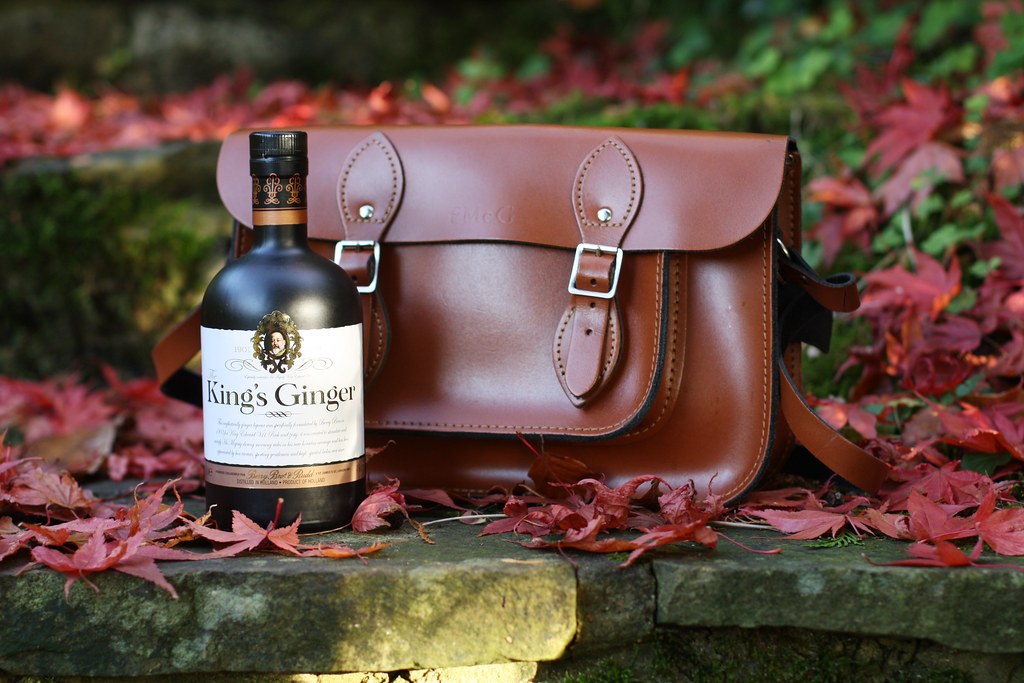 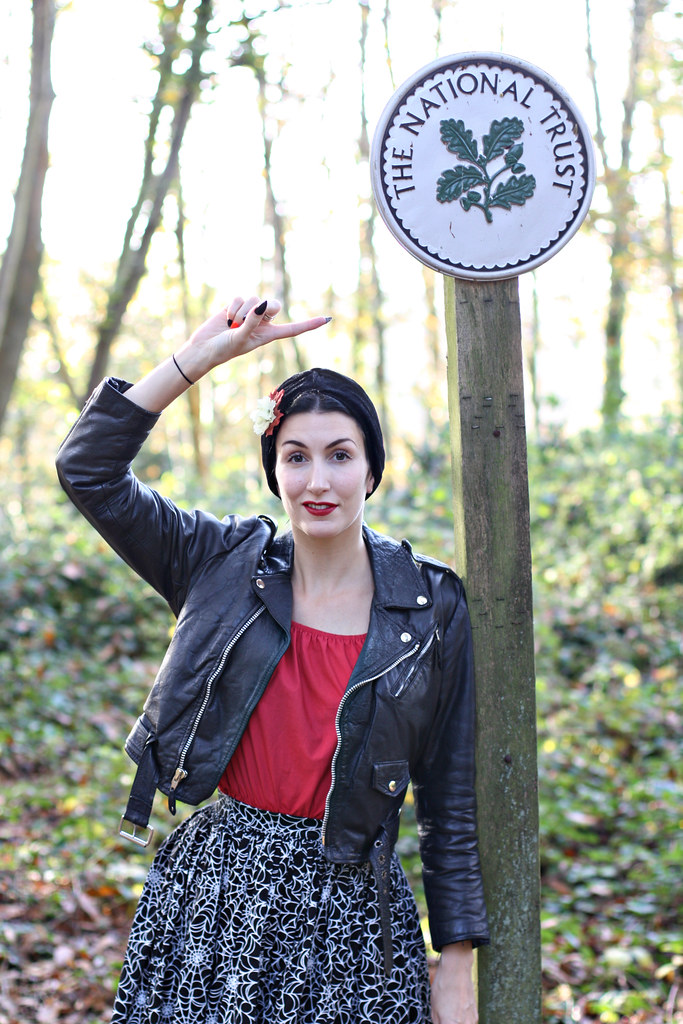 Catch you next time!

Such an interesting post! I've always loved visiting National Trust estates and properties, and while I've learned the history behind those, I've never really thought about the history of the National Trust itself – definitely learned something today! And your photos are gorgeous with all the different coloured leaves, plus your skirt is so pretty 🙂

Very interesting with gorgeous photography. Loving that beret too. 🙂

There is a poetic beauty of the finest magnitude to this rolling, autumn kissed, gorgeous slice of British landscape (that is of course made all the lovelier by your stylish presence, dear Fleur).

Beautiful article. Do you like Antiques as well as vintage? Would be lovely to see you write something about Antique Lighting