Welcome back to everyone’s favourite historical features on my blog, namely, Edwardian history in association with everyone’s favourite tipple, The King’s Ginger! This time, I wanted to delve a little deeper into the marvels of the Edwardian age. Or rather the products and brands that were invented and launched in the reign of Edward VII and still endure to this day. So, following an interesting excursion to the Museum of Brands in Notting Hill, and the picking out of a few brands with particular significance to His Maj, here it is! I do hope you enjoy. 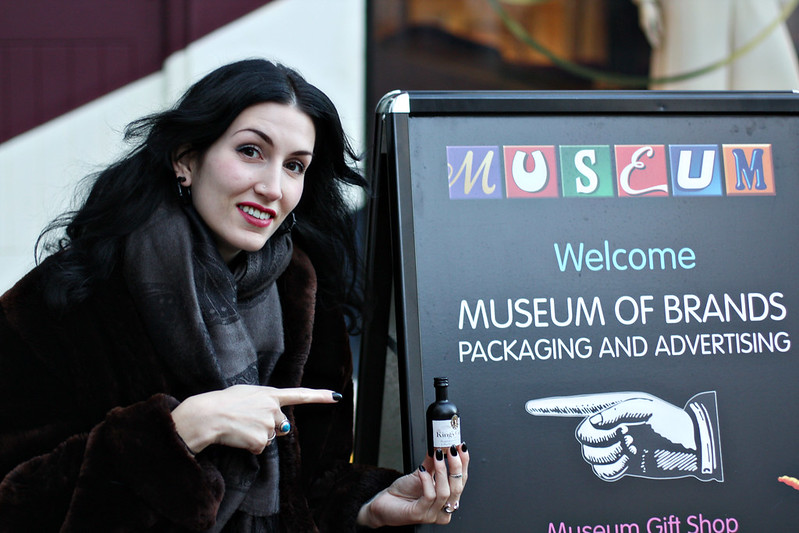 On a chilly day in late January, I went along to the foremetioned Museum of Brands for a look around. It’s a fascinating place, stuffed with old packaging (and new packaging) and snippets of information about the history behind the products we all know and love. Unfortunately, they don’t allow photography inside (copyright issues on the newer products), but they do have a very helpful press department and a wonderful book to go with each era of brands in the museum, which I bought, photographed and have reproduced here with permission from the Museum. 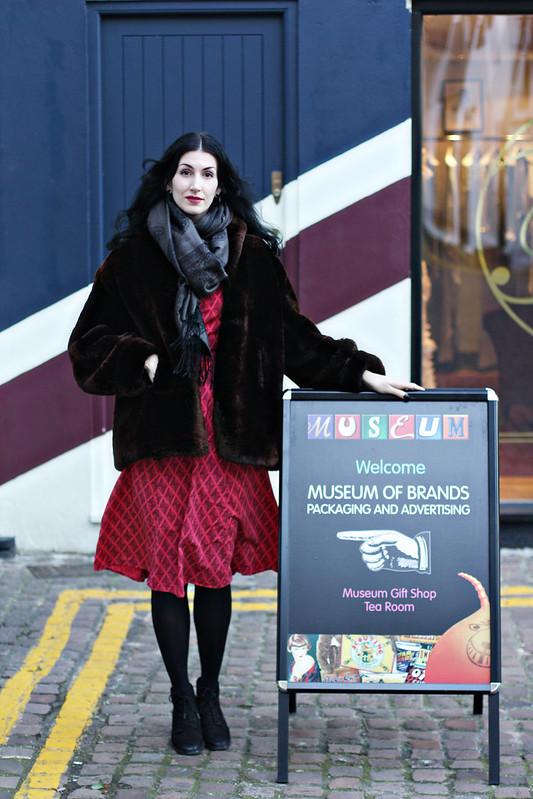 It’s not really an exaggeration to say that the Edwardian era was a time of unprecedented innovation. The much longer Victorian era did introduce many brands that are still around, but both in the UK and across the pond, inventions and culinary experiments were numerous between 1901 and 1910. (The greatest of all these is, of course, The King’s Ginger, first produced in 1903. Hopefully you’re all sipping its fiery warmth in snowbound homes across the pond, and slightly nippy ones in the UK, as you read this). It was also a time of great change in British society, from women’s liberation and right to education, as well as the suffragette movement – something I’ll write more on in the future. Women were even interacting with the King’s favourite technology and driving cars! I know! One huge invention that completely changed the life of many women was the motorised vacuum cleaner. 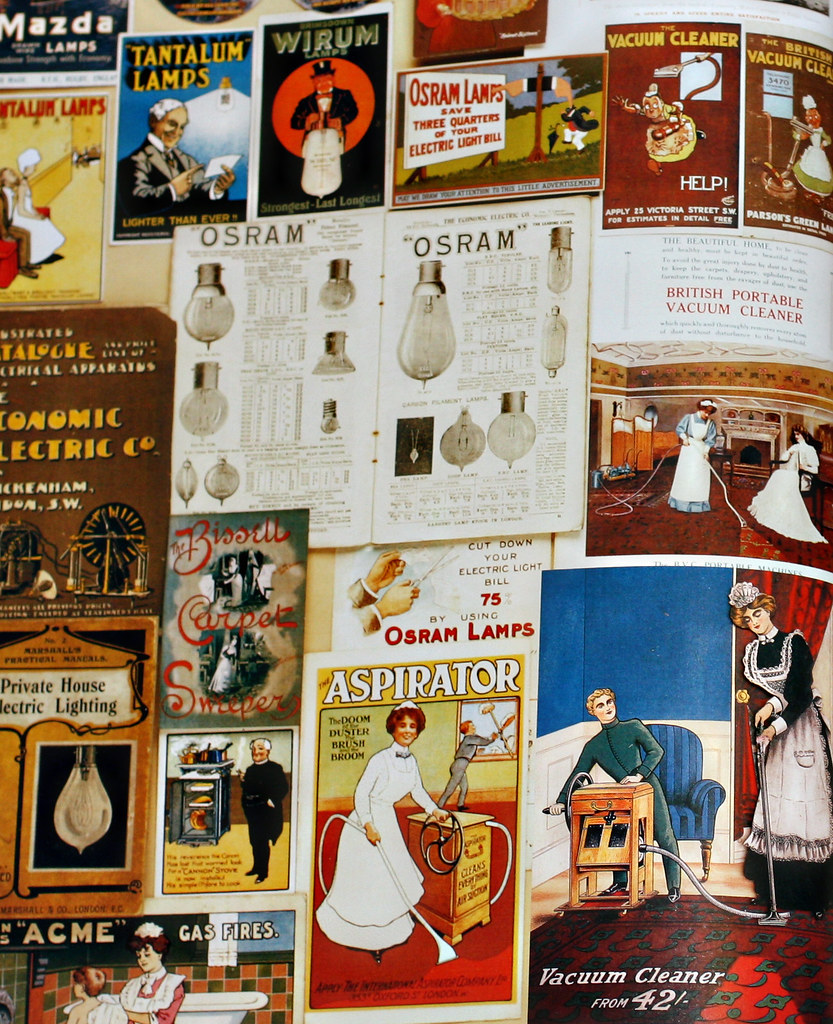 In 1901, Hubert Cecil Booth patented his ideas for the first ever motor-powered vacuum, which rather marvellously sucked dirt up instead of just blowing or brushing it into a different area. A completely revolutionary idea which sent shockwaves through domestic servants everywhere, who feared they would soon be replaced by machinery. Indeed, the adverts used to promote smaller appliances would seem to agree, though the first one was so huge it had to be drawn about the streets by a horse and so expensive that almost no one could have afforded one for their own household. Instead, it would be hired out to several houses at once, parked outside and long hoses fed through windows on different floors. It was so loud when operating that cab-horses apparently went beserk, which led to Booth actually being sued a few times by cabbies!

Outside a Wines & Spirits merchants too! Maybe he even did Berry Bros. & Rudd?!

“[Booth’s] biggest breakthrough came early, for just before the Coronation of King Edward VII in 1902, it was found that the blue carpet beneath the thrones was filthy. The word went out: “Send for Booth! Only he can save us.” So into the Abbey went Booth and his operatives and hoses and the result was a triumph. When the King and Queen heard what had happened, they demanded a Command Performance and were so delighted that they bought one cleaner for the Palace and another for Windsor.”

Booth’s company, the British Vacuum Co. is still going today, although they now make industrial cleaners rather than household ones. A shame, as we could be using his name instead of his American rival Hoover (established 1908) as a verb. ‘Boothing’ the floor doesn’t have quite the same ring, though. 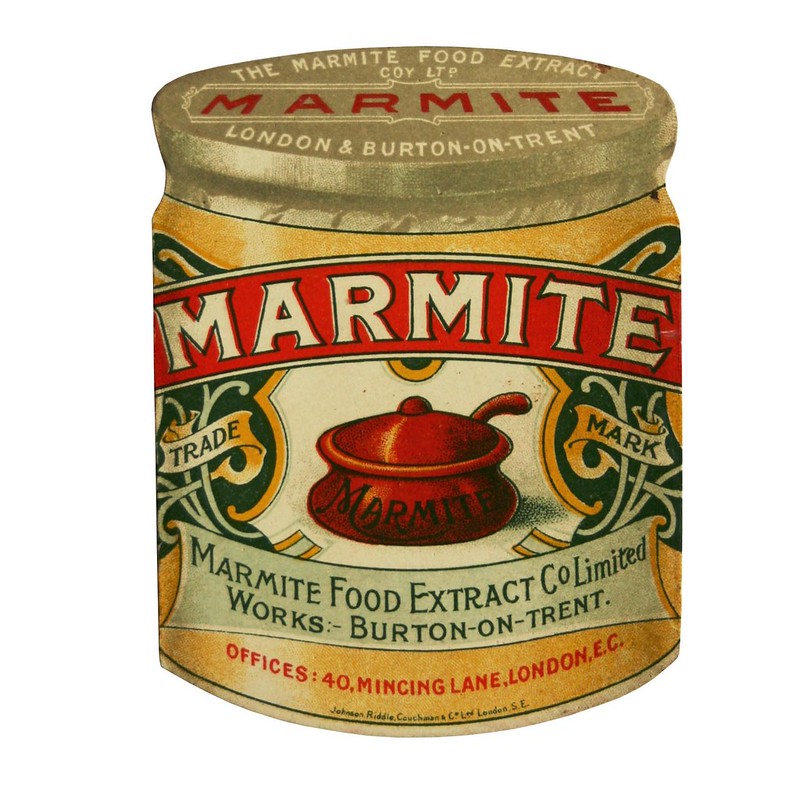 Image courtesy of the Museum of Brands

So what else can we thank the Edwardian era for today? Marmite (which happens to be my favourite foodstuff of all time, no exaggeration) came about in 1902. The way in which it’s associated with King Edward VII is convoluted but interesting, so stick with me here. Baron Justus von Liebig was a 19th-century German organic chemist, who invented beef extract. This process was commercialised and turned into a brand – Liebig’s Extract of Meat Company, or LEMCO. They then patented Oxo, which I have mentioned here before as they sponsored the London Olympic Games in 1908, during Edward’s reign (the Wikipedia page smugly notes that they were the first commercial sponsor of the Olympics, despite claims by Coca-Cola) and the lucky Olympic athletes received fortifying Oxo drinks during their exertions!

Johnny Hayes, running the marathon in 1908. Oxo just out of shot.

In fact, the 1908 Marathon course had booths along its length, similar to the water and sports-drink stations in a modern race, offering hot and cold Oxo for the refreshment of the runners. They could also take a flask to sip from along the way! According to the Public Domain Review, ‘Many Edwardian trainers believed drinking water during a race was bad for the runner, though a little brandy or champagne was considered a useful stimulant.’ *cough* Or King’s Ginger! It also notes that marathon day was one of the hottest of the whole summer in 1908, but at least the salt in the Oxo might have brought some benefit to the sweaty competitors…

Image courtesy of the Museum of Brands

Moving swiftly on from hot beef drinks on summer days, Fry’s have been making their chocolate cream bar (which surprisingly enough is vegan) since 1866, but in 1902 they launched their milk chocolate and captured a nation’s hearts with their ‘five boys’ campaign. Fry’s was taken over by none other than Cadbury in 1919, the latter of course launched their Dairy Milk in 1905! I’d like to think Bertie, who was a connoisseur of all things food, would have also been partial to a square or two of ‘C.D.M’! This spread with its sheer range of confectionary would indicate that much of Edwardian Britain had a sweet tooth, to be fair. 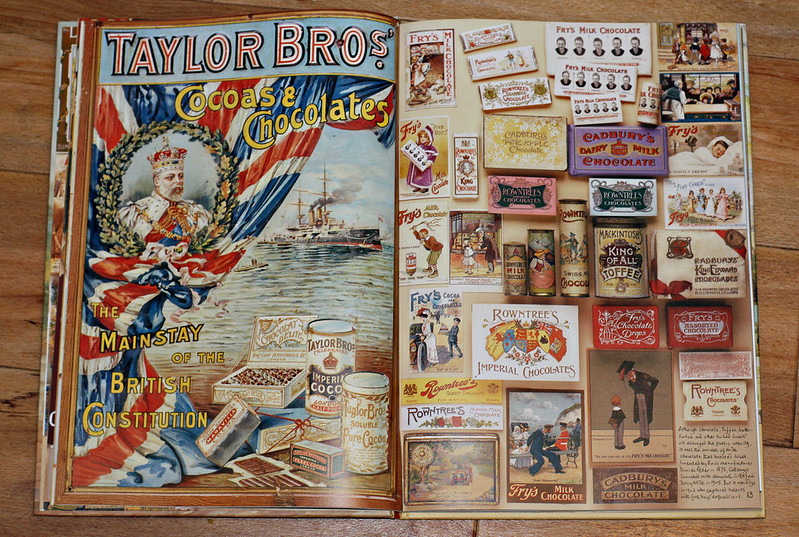 Image reproduced courtesy of the Museum of Brands
Typhoo Tea and Perrier all emerged in 1903 – I’ve touched on those both before. Daddies Sauce was also launched in 1904. Unlike many Edwardian brands, Daddies was not actually the inventor of brown sauce, that honour goes to the Victorian H.P. but they have both endured over a century of production. Though a couple of weeks ago, the Guardian wrote of the falling fortunes of brown sauce… it must be said that the writer is a self-confessed hater, saying of the ‘nefarious brown’:

‘This was the perfect table sauce for jowly, Victorian and Edwardian gentlemen whose palates were so befogged by years of brandy and cigars, grouse and spotted dick, that only this shrill alarm of a sauce could pierce that bleary, weary gastronomic gloom.’

Harsh. Sounds like a familiar figure, though. I wonder which sauce the King preferred? 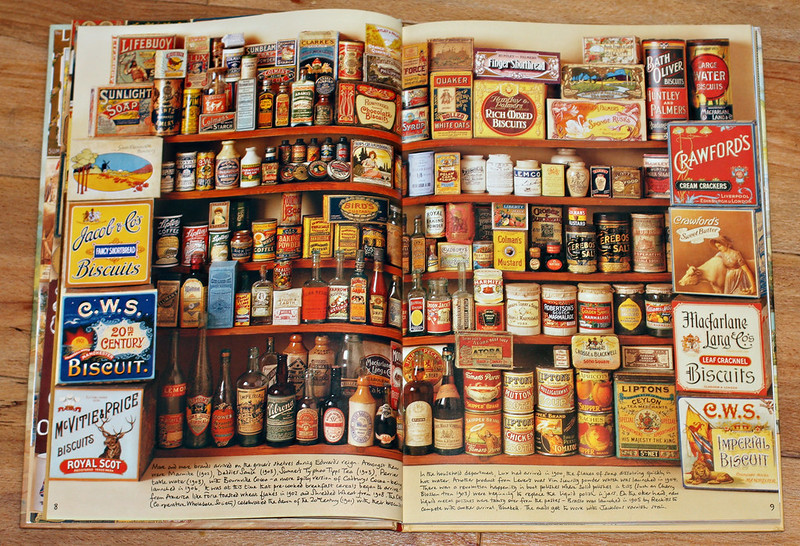 Edwardian pantry, reproduced courtesy of the Museum of Brands

Now, using ‘celebrities’ to promote products is something the Victorians kicked off, but in the days before television there could be no nationally-famous superstars to promote tea, chocolate and tobacco… with one exception.

His Majesty the King, of course! 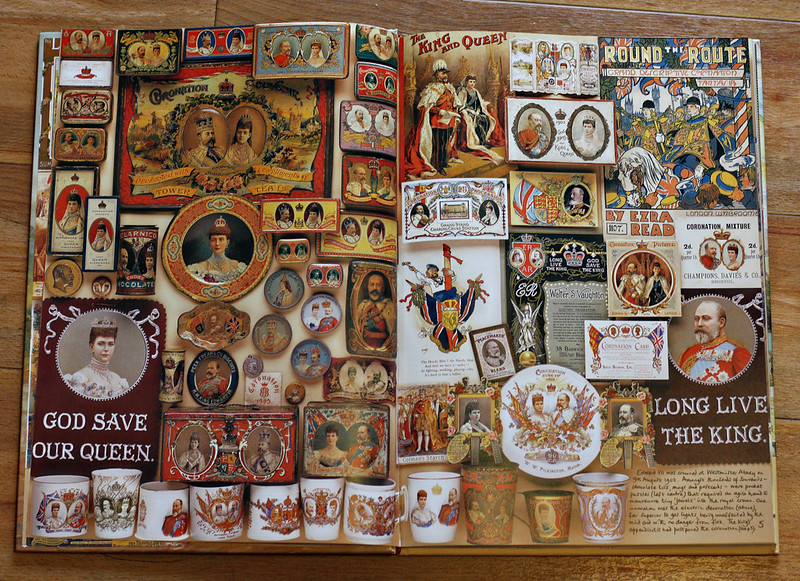 Image reproduced courtesy of the Museum of Brands
Retailers went a little overboard for tie-ins for the Coronation (if you enlarge above, you might see The Peacemaker Whisky and Coronation Butterscotch, even a commemorative box of starch!) and continued the theme throughout Bertie’s reign. Imperial this and Royal that, King of all Toffee and Queen Chocolate as well as rather classist names like ‘Chocolat d’Elite’ and Aristocrat cigarettes. Sadly, these brands were all limited-edition! 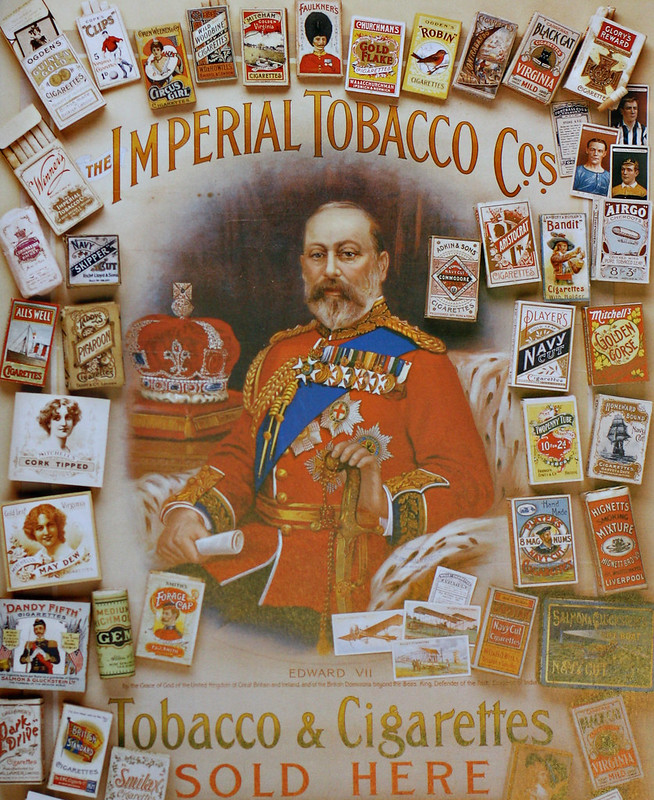 But this leads me onto another of the King’s favourite vices – ‘gaspers’ (also known as cigarettes). He reputedly smoked more than 12 cigars and 20 cigarettes every day, which inevitably contributed to his death in 1910. Unfortunately a lot of the populace probably went the same way, due to the increasingly fashionable pastime that was smoking. The Imperial Tobacco Company was formed in 1901 and in the days before lung cancer (the discovery, not the actual disease), brands like Woodbines were selling an astonishing 500 million a year. It was becoming so prevalent to smoke, with new brands emerging designed to appeal to men and women separately, and children cottoning on, that a clause in the Children’s Act of 1908 was made, forbidding the sale of tobacco to under-16s.
I could go on about a lot more unglamorous brands from the time like Cherry Blossom shoe polish (1903), Brasso (1905), Toblerone (1908) and Persil (1909), but as this is a piece in association with The King’s Ginger, itself a most glamorous product, I’ll end with a little bit about cosmetics and perfumes. 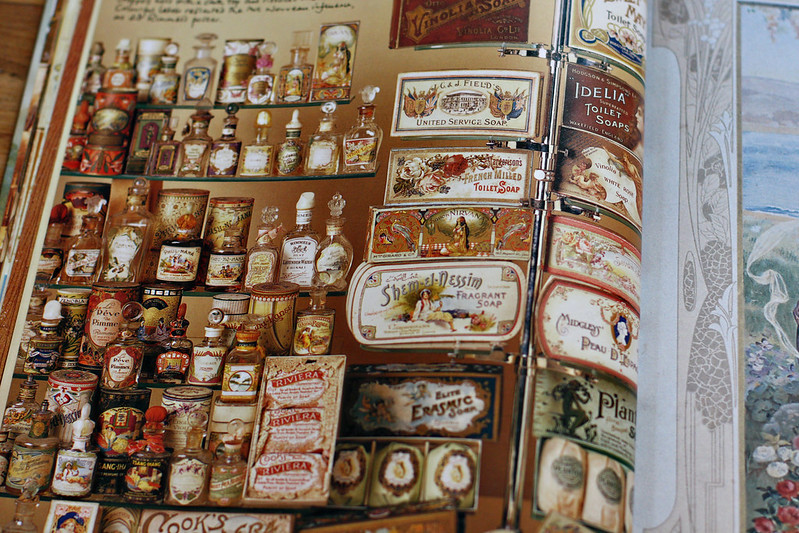 The ladies of the era like their Victorian predecessors liked both exotic fragrances that evoked the far-flung lands of the Empire and beyond, and more homely scents. So Japanese-inspired Hasu-no-Hana jostled side-by-side with Yardley’s April Violet and Plantol soap (launched by Levers to try to oust Pears…it didn’t) in the Edwardian toilette. Sadly, I can’t see a single perfume in the spread above, other than Yardley’s, which is still around today (and The Internet suggests that the latter was launched in 1913, so not sure even about that).
Lastly, any excuse for a bit of Art Nouveau, which was used to advertise everything from biscuits to books in the 1900s. I recommend the Museum of Brands’ founder Robert Opie’s Edwardian Scrapbook this is reproduced from as a fabulous bit of Art Nouveau inspiration! 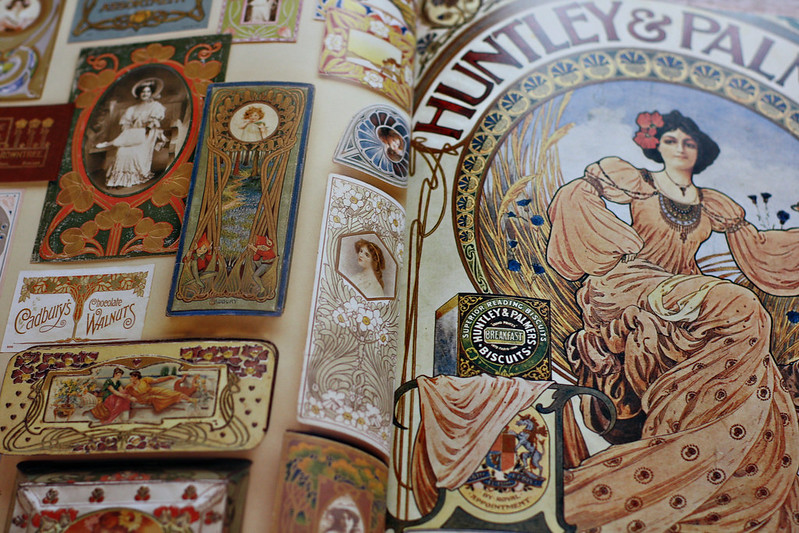 In summary, there are many, many more brands that were contemporary of King Edward VII that I could have written about today, but I shall leave it there. If you’re interested in these things, do visit the Museum of Brands if you can, I thoroughly recommend it… though there is one brand conspicuously missing… 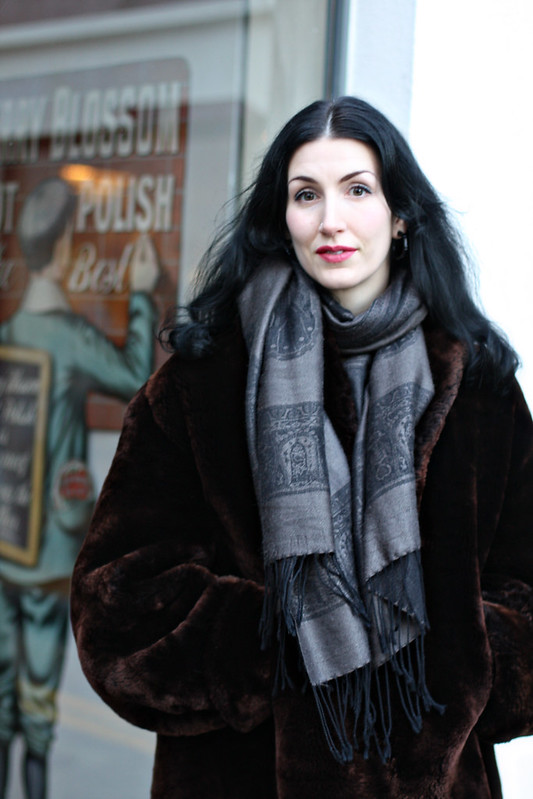 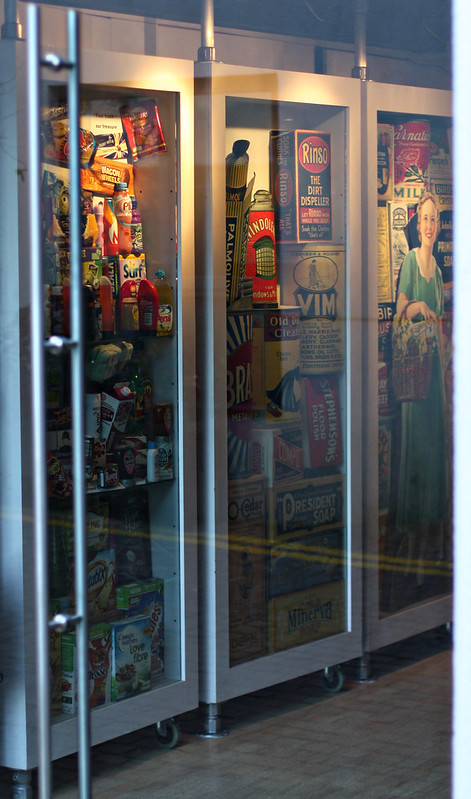 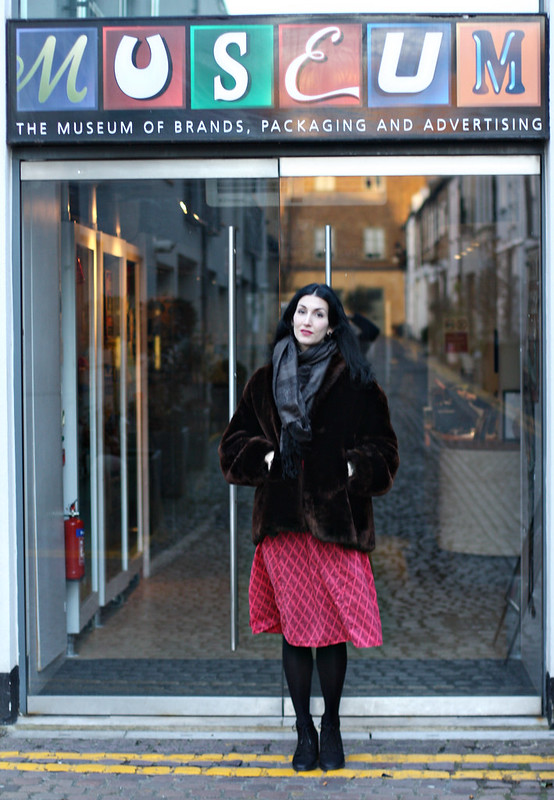 Side-note, been styling my hair in a softer style lately – what do you think?

May I therefore take this opportunity to recommend a certain cockle-warming recipe to you all, if you have decided that this is the time to give the old KGL a try!

The recipe for the Kings Mulled Cyder can be found here!

We've already run out of the bottle of King's Ginger we bought at Christmas – had to buy a new one this week!

Hasu-no-hana is still around! Shem-el-nessim, seen here as a soap, is also around in perfume form. They are from Grossmith, which a member of the family relaunched a few years back, using the original formulations as far as possible (modern regulations make exact reproduction impossible). I have a bottle of Phul-nana, another Grossmith from the same era, and would happily own Haso-no-hana and Shem-el-nessim too if they weren't so pricy. If you're ever near Les Senteurs or Fortnum and Mason, they both stock Grossmith scents, so you can nip in and sample them.

Ooh! I love me a bit of old packaging – I must pay a visit when I am next daaarn saaarf 🙂

Oooohhh, vintage/antique ad awesomeness overload! 🙂 I scrolled through these photos leisurely three times, lapping up the lovely details in each. I can never, ever get enough of classic vintage advertising like this. They were so often true works of art in a way that one rarely encounters (IMO) in the ad world today.

This is so brilliant! What about Edwardian jewellery? 🙂

Adore the detail in vintage advertising, so different from modern, minimalist,'soundbite' style !!