Tomorrow, a very exciting exhibition is opening at the Imperial War Museum. Fashion on the Ration is the story of everyday people in 1940s Britain, and how style and fashion endured and evolved under the strict rules of rationing. I’m getting a sneak peek tonight as I am DJing at the private view with The Vintage Mafia, and I can’t wait!

As a brief overview (please click on over to my pal Jeni Yesterday’s blog, she works for the IWM and therefore has the full inside scoop), there are six sections to the exhibition:

Into Uniform looks at how Second World War Britain became a nation in uniform, arguably the biggest visible change to how people dressed at the time. Many key pieces of uniform, both from  the men’s and women’s services, will be on display revealing the pride and even jealousies felt by those stepping into uniform for war service.

Functional Fashion explores how the demands of wartime life changed the way civilians dressed at work and at home, inspiring retailers to sell innovative and stylish products, such as gas-mask handbags, blackout buttons and siren suits, as well as luminous faux flowers!

Rationing and Make do and Mend will look at why clothes rationing was introduced in 1941, how the scheme worked and how it changed the shopping habits of the nation. With limited options for buying new clothes, people were encouraged to be creative and make clothes last longer by mending, altering, knitting and creating new clothes out of old material. Items on display include a bridesmaid’s dress made from parachute material, a bracelet made from aircraft components, a child’s coat made from a blanket and on display for the first time a bra and knickers set made from RAF silk maps for Countess Mountbatten.

Utility Clothing was introduced in 1941 to tackle unfairness in the rationing scheme and standardise production to help the war effort. Utility fashion ranges were made from a limited range of quality controlled fabrics and this section will feature a catwalk of pieces, including a lady’s cotton summer dress, underwear, a tweed sports jacket and leather gloves, and a girl’s velvet green winter dress. Clothing restricted by ‘Austerity Regulations’ such as shoes with a maximum two inch heel will also be featured.

Beauty as Duty examines the lengths to which many women went, to maintain their personal appearance – and the pressure they felt to do so. On display will be adverts promoting war themed make-up such as Tangee’s lipstick for ‘lips in uniform’. Cosmetics and clothing often had a patriotic edge to them as shown in a colourful display of scarves by Mayfair fashion house  Jacqmar, with wartime slogans such as “Salvage Your Rubber” and “Switch That Light Off”. By wearing these items women were able to overtly demonstrate they were doing their bit for the war effort.

Peace and a new look? This section looks at how the end of the war impacted upon fashion, and considers the long-term impact. On display will be a ‘VE’ print dress worn by the comedienne Jenny Hayes to celebrate the end of the war, and an example of the ubiquitous demob-suit, issued to men leaving the military services. In 1947, the launch of Christian Dior’s ostentatious ‘New Look’ shook the fashion world desperate for something new after years of pared down wartime fashion.

I think my favourite thing about it all is that despite wartime being the exact opposite of a barrel of laughs, and even though in the last years of it, everyone felt understandable beaten down, us Brits never lost our sense of humour and that’s reflected in a lot of the fashion. The famous novelty Blackout Scarf (based on a poster, I believe) sums it up perfectly!

The exhibition site has a section on wartime weddings, and so I thought I’d re-share this one from my family archives: 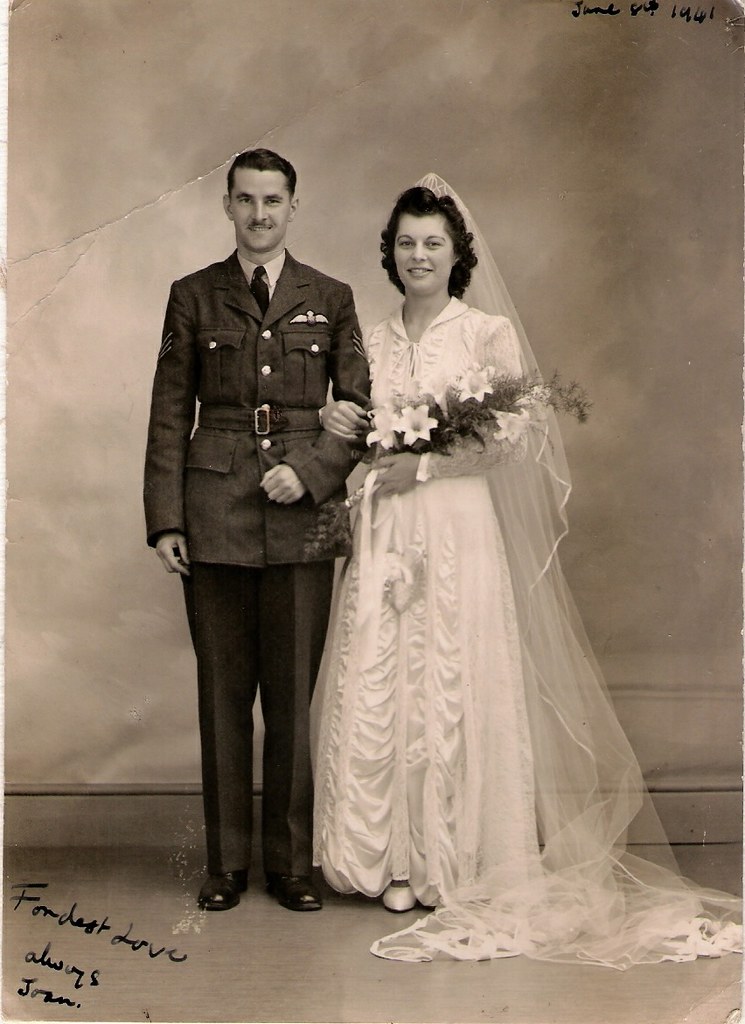 Clothes rationing came into effect on 1st June 1941. My grandmother and grandad married on 8th June 1941 – so she must have numbered among the last brides who didn’t have to forge wedding dresses out of parachute silk or whatever they could scrounge up! What a dress.

There’s also a brilliant book written by Julie Summers, also called Fashion on the Ration (link to the IWM shop) to accompany the exhibition. I haven’t read it properly yet, though I have read the first chapter and flicked through the rest – it’s very thoroughly researched and very interesting, with chapters that roughly correspond to the sections of the exhibition. I expect to be an authority on the subject after finishing it!

The centre has colour plates with such gems as the aforementioned silk map underwear!
I can’t wait to see the exhibition – if anyone else is going tonight, please do say hello! I’ll be in one of my 1940s suits, especially for the occasion.

Thanks for sharing Fleur!

The exhibition looks really interesting, I'd love to come and have a look! I can spend hours in museums so this is right up might street!

I've got a dress made from parachute silk that I wore when I was a baby and have kept it in case I have a little girl in the future. It's amazing how people think "upcycling" is a new thing!

That exhibition does look so good. I'll probably look out for the book, as I don't know when I'd be able to get to the museum for the exhibition. Thank you for sharing your family photo.

Wearing old fashioned stuff…why? Is it cos you're tryna look different? Ain't tryna look different been done to death, to the point where it's basicly mainstream? Or do you just like the style?
I went to a swing dance once, thought I'd gone back in time. What's the appeal of dressing in that stuff? Interested to know i s'pose.

As much as I wish I could hope on a plain (or a boat or a sub – really, any mode of transportation that crosses the mighty Atlantic Ocean) and see this stunning exhibition in person, that isn't possible, but I have high hopes and firmly crossed fingers that a copy of that book will land on my bookshelf at some point. 🙂

Hit the nail on the head, sort of. I personally started dressing vintage many years ago because it was different/alternative AND I liked the style. Now it's incredibly mainstream but I still like the style, so I wear vintage but not as strictly any more. Can't speak for why others do though, lots do for nostalgia, love of history etc.

Wow, that sounds like a fascinating exhibition!
I suppose the 'beauty as duty' segment will include ads about how you could get seam lines painted on your bare legs to imitate the look of stockings… I've always found that in interesting example of 'keeping up appearances' in the most difficult of times.
And about that wedding dress… Most of what I know about textile rationing is about what happened here in the Netherlands but I can imagine things were kind of similar in the UK. Rationing was introduced to spread the limited resources of necessary materials across the whole populations. Here, true luxuary materials like fur were excluded from rationing because they were not necessary and had never been within the reach of everyone. That said, I started typing this thinking it would also apply to silk fabrics but then realized that all silk fibre will have been needed for parachutes and airforce maps…

Thank you very much for this post! It’s really interesting! Fell in
love with your blog! You did a great job!

Seems the UK is big on retro fashion. As a pin up photographer I'd love to see the exhibit. I'm sure it would give me a ton of new inspiration.

Such a super cool book!!! WOWOWOW!!! Love the fashion! SOO gorgeous and still in today! And those shades are epic!
kisses